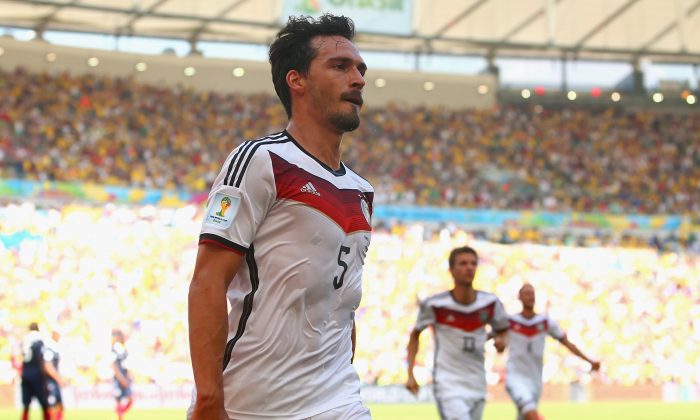 See the highlights here, and the match report below that.

Mats Hummels scored for Germany in the 12th minute with a thumping header.

RIO DE JANEIRO (AP) — Germany reached the semifinals for a fourth straight World Cup by beating France 1-0 Friday in a cagey match settled by a first-half header from Mats Hummels.

The center back headed Toni Kroos’ free kick in off the underside of the bar in the 13th minute in one of the few chances created in muggy conditions at Maracana Stadium.

Germany goalkeeper Manuel Neuer punched away Karim Benzema’s powerful drive in injury time to preserve the lead, having saved well from Mathieu Valbuena and Benzema in the first half.

Next up for Germany as it seeks a fourth world title will be the winner of Friday’s later quarterfinal between Brazil and Colombia.

France struggled to impose its attacking game in the face of a robust, experienced Germany side that seemed more comfortable on the big stage.

It guaranteed Europe at least one representative in the semifinals — the Netherlands and Belgium also have chances to qualify on Saturday — and continued Germany’s recent dominance over France at World Cups.

The most notorious of those was the meeting in the 1982 semifinals in Spain, when Germany won on penalties following a 3-3 draw in a match marked by a late and high tackle by Germany goalkeeper Harald Schumacher on France defender Patrick Battiston that escaped punishment.

That went down as one of the most riveting matches in World Cup history, but the rematch — 32 years on — couldn’t have been more different.

The occasion was perhaps too much for a young, revamped France team playing together in football’s marquee tournament for the first time. The attacking flair that characterized much of their play in the group stage was largely absent in the 2-0 win over Nigeria in the second-round and again here in Rio de Janiero.

Tightening up both its defense and midfield, Germany selected a more robust team after looking shaky and open in a 2-1 win over Algeria in the second round and gave France little room to play.

It meant for a turgid first half of few opportunities but Hummels made no mistake with his, proving too strong for his marker, Raphael Varane, from a typically dead-eye delivery from Kroos.

At the other end, France pierced Germany’s high defensive line to produce chances for Valbuena and Benzema but goalkeeper Neuer was equal to both attackers’ efforts.

The weather conditions played a part in the slow tempo of the game but France stepped up the pressure in the second half, with Neuer saving a header from Varane as the center back tried to atone for his weak defending for the goal.

Benzema’s late chance got French fans excited but Germany could already have been 2-0 by then, with France goalkeeper Hugo Lloris saving a low shot by substitute Andre Schuerrle on a counter-attack.