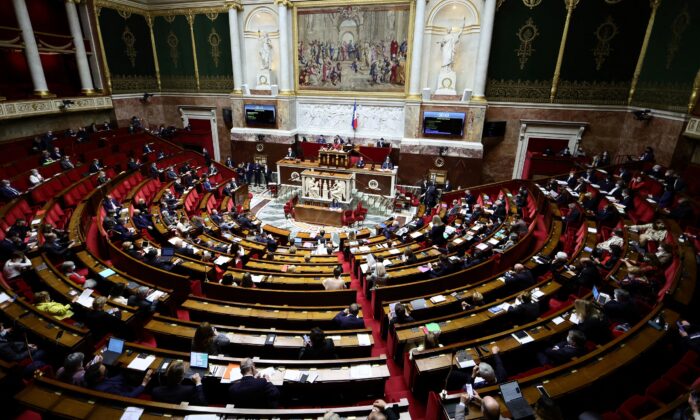 A general view shows the hemicycle, during the opening debate on the French government's planned bill on the vaccine pass, at the National Assembly in Paris, France, on Jan. 3, 2022. (Sarah Meyssonnier/Reuters)
International

France Vows to Go Ahead With Vaccine Pass Despite Parliamentary Glitch

PARIS—French government officials on Tuesday vowed to enact by mid-January as planned a law to block unvaccinated people from hospitality venues, despite the legislation hitting a procedural hitch in parliament overnight.

Until now France has enforced a COVID-19 health pass, which means in order to get into restaurants, cafes or cinemas or board trains, people need to either show a fresh negative test, or proof of vaccination.

The legislation will remove the option of showing a negative test, effectively barring unvaccinated people from hospitality venues or trains.

It has faced fierce resistance from anti-vaccination campaigners and far-right and far-left groups, but is backed by the government which has a majority in parliament.

Tense discussions in parliament on the new law were halted after midnight on Monday after a majority of deputies voted to suspend the session. Pro-government lawmakers were caught by surprise, and were not present in the chamber in sufficient numbers to block the motion.

The heads of the various parliamentary groups must now set a new date for debates to resume, said Annie Genevard, the Vice-President of the National Assembly, the lower house of parliament.

Once voted in the lower house, the new law needs to be voted on by the Senate, before it comes into force on Jan 15.

“The minister of relations with parliament and parliament members will discuss the timetable today. We could have the National Assembly and parliament sitting over the weekend to accelerate. We need to move fast,” Beaune said.

The proposed tightening of the rules has angered anti-vaccination activists. Some lawmakers who back the measure say they have been subject to aggression including vandalism and violent threats.