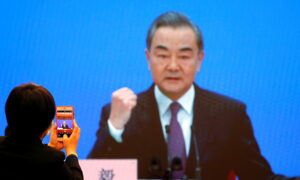 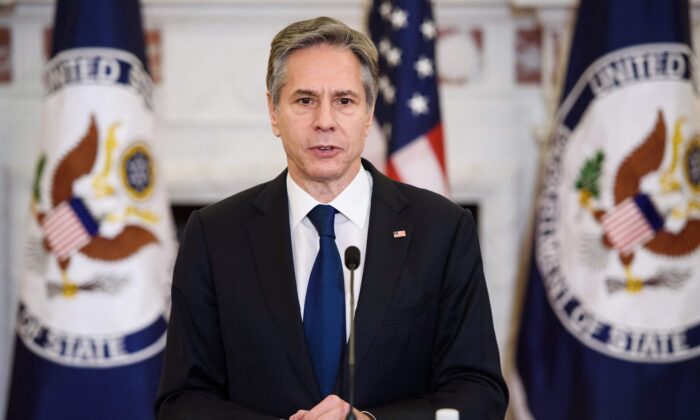 Secretary of State Antony Blinken speaks in the Benjamin Franklin Room of the State Department on April 12, 2021. (Mandel Ngan/Pool/AFP via Getty Images)
Thinking About China

France, US Agree on China Threat but Devil Is in the Details

France and the United States are finally “‘on the same page’ in their determination to resist the possibility of a Chinese-led world order that would be ‘profoundly illiberal in nature,’” according to a New York Times interview with U.S. Secretary of State Antony Blinken published on June 25.

Blinken said that “‘our purpose is not to contain China’ or ‘try to hold China back.’ But when it comes to defending a free and open international order, ‘we will stand up,’” according to the NY Times. The alternative is dire. Blinken said it was “either no order—a world of chaos that ‘inevitably leads to conflict and that almost inevitably brings us in’—or Chinese domination.”

Those are tough words that require a tough response against China. The Democrats are learning.

According to the NY Times, Blinken’s emotion was visible, which must mean he really meant it.

The NY Times was surprised at the convergence of French and American views given that French President Emmanuel Macron has supported a militarily stronger and more independent Europe. But it needn’t have been surprised.

The trend of a stronger Europe has been building for decades and sped up as Vladimir Putin’s illiberality and territorial aggression increased, notably against Georgia in 2008 and Ukraine in 2014. China has done the same, or worse, in Asia.

In order to maintain the balance against China, the United States has had to withdraw attention from Russia and the Middle East, and pivot to Asia, starting in 2012. America is losing the capacity to fight two wars simultaneously against Russia and China, while at the same time holding down terrorism in the Middle East. This is the genesis of friendly American overtures to Putin and Kim Jong-un, even though Putin invaded Ukraine and Georgia, and Kim Jong-un keeps lobbing missiles over our Asian allies.

So, President Donald Trump got it right when he warned NATO countries that they would have to pay up and fund their agreed 2 percent of GDP on defense, or the United States would start to withdraw our protection. It was a tough love for Europe but Europe got the message, increased its defense spending, and started to think more seriously about a common European foreign and defense policy. The Europeans didn’t like Trump but Biden isn’t offering them much more, other than his big long-in-the-tooth smile.

So, a militarily strong and unified Europe is absolutely necessary and to be expected so that China and Russia can’t utilize the divide-and-conquer tactics that they are using currently, for example, by having Hungary veto European Union statements against China’s human rights abuse and territorial aggression. With an EU common foreign and defense policy, Hungary won’t be able to pull that stunt any longer.

Biden’s support, or at least silence-is-consent policy, when it comes to France’s call for more European strategic autonomy from the United States, will yield the same end result as Trump’s call for greater European military spending or the United States withdraws its security. Both policies result in the same American goal: a stronger and more unified European ally that will be a real asset on the global battlefield of the future.

A strong and independent European Union, along with a strong and independent United States and Japan, is the best hope for defending a world of independent democracies against the attempts of a communist Chinese regime to control us all for its own ends. We can and must achieve peace through the strength of strong democratic allies. The Biden administration appears to understand this.

Unfortunately, Blinken apparently believes that he can beat China through Biden’s “Build Back Better for the World” program (a.k.a. B3W), according to the interview. B3W is a fancy way of saying that the United States and allies will try to out-spend China globally in terms of foreign aid. Much of the cement and steel that is needed to produce infrastructure in the Global South, however, is currently being produced in China. If America wants to compete, it will have to buy its steel and concrete from American and allied manufacturers, and insist that beneficiary countries of B3W do the same.

Keeping the Global South honest in its development decision-making will require not only offering a better deal than Beijing, but ensuring that Beijing does not bribe global leaders to get them to accept Beijing’s worse deals. The United States and allies will have to get more creative, and tougher, about prosecuting corruption globally.

Finally, if the West and allies spend all our money on highways in Africa, for example, we may not have enough remaining for the military spending needed to defend against, or defeat, China. If China keeps building its military at its current rate, at some point, it will be able to defeat United States and European military forces, and at that point, B3W will be next to useless.

Apparently, Blinken did not volunteer his thoughts on these strategic pitfalls, and the NY Times did not ask. Let’s hope that the United States and France had some better ideas behind closed doors. America, Europe, Japan, and our other allies are going to have to step up our game if we are going to leave the world a safer, freer, and more secure place for our children.