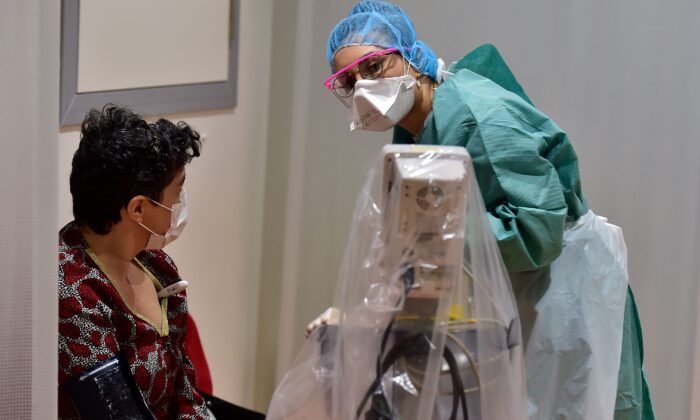 A medical staff member examines a patient at a hospital in Bordeaux, France, on March 9, 2020. (Georges Gobet/AFP/Getty Images)
WORLD

French health officials said Wednesday that 509 people died in the country due to COVID-19 in the past 24 hours, France’s highest daily total yet.

State health agency director Jerome Salomon told a news conference on April 1 that the number of confirmed cases had risen to 56,989.

“Since March 1, 4,032 deaths have been recorded in hospitals. That’s 509 more today (than yesterday). Eighty-three percent of these deaths involve people older than 70-years-old,” Salomon said at a briefing in Paris.

The grim figures make France the fourth country to pass the 4,000-death threshold for COVID-19 after Italy, Spain, and the United States.

France is now in its third week of a lockdown to try to slow the spread of the Chinese Communist Party (CCP) virus. Authorities have ordered people to stay in their homes except for essential travel from March 17 until at least April 15.

French Prime Minister Edouard Philippe said the lockdown would likely be dialed back in stages, rather than lifted in its entirety.

He did not indicate when the government might start to ease or lift the lockdown.

The government also reminded Parisians that trying to escape the city for a holiday—as the school break begins next week—did not constitute essential travel and that controls would be reinforced “with utmost firmness.”

“Without a valid reason, travellers will be fined for not respecting the confinement rules and will not be allowed to continue their journey or to take their train or plane,” the Paris Prefecture said in a statement on its Twitter feed.

The COVID-19 pandemic has killed more than 30,000 people in Europe, with Italy and Spain registering over 75 percent of the disease-related deaths.

On April 1, there were 31,221 recorded COVID-19 deaths in Europe, according the latest data collated by Johns Hopkins University, which is tracking the global pandemic.

The total number of deaths globally noted in the running tally was 43,537, making Europe the continent that has been hit hardest by the Chinese Communist Party (CCP) virus.

Director-General of the World Health Organization Tedros Adhanom Ghebreyesus said Wednesday he is “deeply concerned about the rapid escalation and global spread” of COVID-19.

He told a virtual news conference in Geneva, Switzerland, that there has been a “near-exponential growth” in the number of new COVID-19 cases.

“In the next few days we will reach 1 million confirmed cases and 50,000 deaths worldwide,” he said.