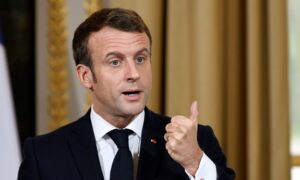 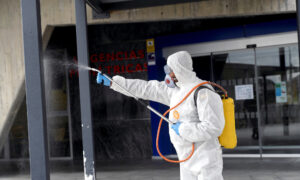 Spain Warns the 'Worst Is Yet to Come' as Coronavirus Deaths Surpass 1,300
0 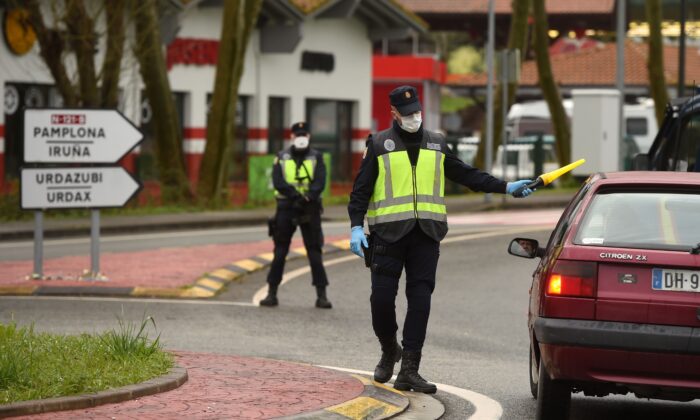 A Spanish police officer denies access to Spain at the border with France on March 17, 2020. (Gaizka Iroz/AFP via Getty Images)
WORLD

PARIS—French health authorities reported 186 new deaths from the CCP virus on Monday, taking the total to 860 or an increase of 28 percent, with the toll rising more sharply than the last three days as the country is about to enter its second week of lockdown.

During a press conference, Health Minister Olivier Veran added the number of cases had risen to 19,856, which is a rise of about 20 percent in 24 hours.

Veran said 2,082 people were in a serious condition needing life support, up 19 percent compared to Sunday, another increase compared to the last three official tallies.

President Emmanuel Macron told religious authorities on Monday he was against the idea of imposing a total lockdown in France to combat the coronavirus outbreak, a source close to one of the participants said.

Macron has ordered the French to stay at home other than to buy groceries, travel to work, exercise or for medical care. However, some medical professionals have called for stricter measures.

“There will be no total lockdown,” a source close to France‘s Chief Rabbi Haim Korsia, who took part in the meeting at the Elysee palace, told Reuters. “(Macron) said (this) in essence, because that would cause more pain than healing.”

Read More
Wuhan Residents Locked and Nailed Into Own Home, Food Gone and Facing Starvation
A Wuhan Resident Talks The Defenseless Life Controlled by the Regime
Orphaned or Unaccompanied Children Face Tragedy in Hubei Province
Chinese Peasants Sell Vegetables at Midnight to Stay Away from Police
Vendors Forced to Dump Large Quantities of Fruits Due to Slow Sales

Macron’s meeting with religious leaders also concluded that celebrations of the Christian holiday of Easter and the Jewish holiday of Passover would probably not be held this year, the source said.

“If the lockdown is maintained, which should be the case, places of worship will be inaccessible and family reunions won’t be possible,” the source added.