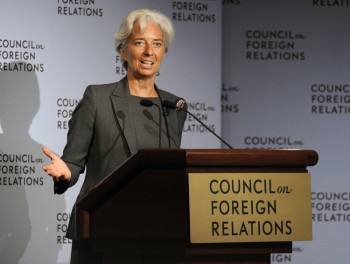 A French court on Thursday opened a case against the International Monetary Fund’s new chief.

In 2007, Lagarde, then the French finance minister under Sarkozy, had called in a private arbitration panel to settle a legal battle brought by business tycoon Bernard Tapie against the then state-owned Crédit Lyonnais bank.

The panel settled Tapie’s suit out of court with 400 million euros from the French government.

Prosecutors say she could have routed the case through the courts and allege that she abused her power in a trade-off for Tapie’s support for President Sarkozy who was elected in 2007.

Socialist member of Parliament Jean-Marc Ayrault told French radio that Lagarde "could not have acted had she not been authorized, or perhaps even coerced, by the president.”

Largarde denied all charges. Her lawyer said the case is politically motivated and predicted a dismissal of the charges, AFP reported.

The investigation raised concerns over Lagarde’s ability to maintain her position as IMF chief, but the IMF board commented that despite the inquiry, “The board is confident that she will be able to effectively carry out her duties as managing director,” according to the report.

Lagarde assumed her position in the IMF in June after former IMF chief Dominique Strauss-Kahn resigned over charges of attempted rape.