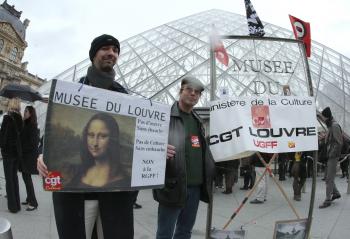 Workers on strike demonstrate with trade union banners to denounce the government measures in front of the Louvre museum Pyramid entrance in Paris on Dec. 3. A strike by Paris museum staff forced the Chateau de Versailles to shut down on Dec. 2. (Francois Guillot/AFP/GETTY IMAGES)
Europe

By Nico Bijens
Print
A strike by the personnel of museums all over France caused world-famous museums like the Louvre, Musee d’Orsay, and The Pompidou Centre to be closed for visitors. Even the Palace of Versailles closed its doors. Only the gardens are currently accessible.

Of all the 34 national museums in France, six of them are closed now because of the strike.

The strike came as a reaction to the plans of the French government to reduce the salary of officials working in the culture sector, together with a reform plan that will replace only one out of two retiring employees with new personnel. Also, the government of Prime Minister Nicholas Sarkozy plans to cut grants for cultural institutions.

Thursday morning, French Minister of Culture Frédéric Mitterrand had a meeting with the unions without any positive results. After the meeting during an interview with French television station France 2, Mr. Mitterrand said he would not give in to the demands of the unions. “This reform will be implemented. There are no exceptions. If we start making exceptions, there will be no end to it.”

According to the unions, over 1,000 jobs are at stake. In total, around 23,000 people work for the Ministry of Culture. More than half of them are contract workers instead of officials.

The victims of the strike, however, are the large amounts of tourists who want to visit the museums in Paris, leaving them wondering what world-famous paintings such as the Mona Lisa and statues such as the Venus de Milo at the Louvre look like in real life.