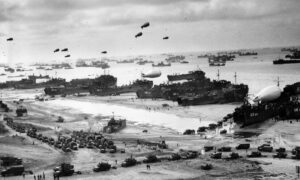 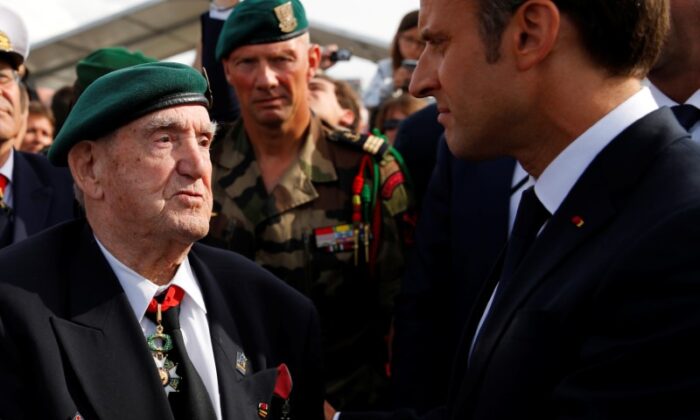 French President Emmanuel Macron listens to French war veteran Leon Gautier, a member of the Kieffer commando, during a D-Day commemoration ceremony in memory of marines and the famed Kieffer commandos who took part in D-Day landings, in Colleville-Montgomery, France, on June 6, 2019. (Francois Mori/Pool via Reuters)
Europe

PARIS—President Emmanuel Macron gave one of France’s highest honours on Friday to Leon Gautier, the last surviving member of the French commando unit that waded onshore on D-Day alongside allied troops to begin the liberation of Europe.

Gautier, 98, rose from his wheelchair to stand, leaning on two sticks, as Macron pinned the medal on his chest. The president then kissed him on both cheeks and embraced him. Gautier was made a Grand Officer of the Legion of Honour.

Gautier, who had escaped to Britain when Germany invaded France, was one of 177 French marine commanders chosen to help spearhead the first wave of D-Day landings in Normandy, stepping ashore on June 6, 1944.

The last other remaining member of that unit, Hubert Faure, died in April this year, making Gautier the sole survivor.

Remembering the D-Day landings in a 2019 interview with Reuters, Gautier recalled how a British commander had let the French unit disembark from their landing craft first, in a symbolic recognition that they were reclaiming their homeland.

Gautier ran up the beach as bullets fizzed overhead, tasked with securing a German bunker that was directing fire at the beach. “By the end of the day I didn’t have many bullets left,” Gautier said.

His home today is just a few hundred metres (yards) from the location of that same German bunker.

Reflecting back, he said: “War is a misery. …You kill a man who’s done nothing to you, that’s war and you do it for your country.”

Macron presented medals to Gautier, and other service personnel, at a ceremony just outside Paris to mark the anniversary of a June 18, 1940 radio address by exiled leader General Charles de Gaulle, calling on the French people to rise up against the Nazi occupation.

By Lucien Libert and Christian Lowe