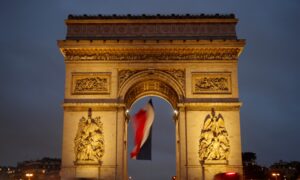 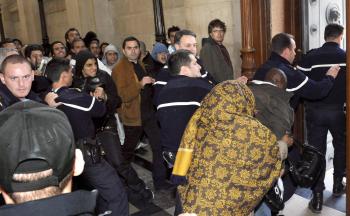 The mother and the brother of Youssouf Fofana leaves Paris' courthouse escorted by policemen as they are threatened by several people, on April 29, 2009, at the end of an audience on the opening day of the trial of Youssouf Fofana. (Stephane de Sakutin/AFP/Getty Images)
Europe

PARIS—The trial of an anti-semitic group that in 2006 tortured and killed a 23-year-old Jewish man, Ilan Halimi, started in Paris on April 29. The court procedure, held in a special court for minors, is likely to be kept closed to the public and media, given the strong polemics surrounding the case.

Ilan Halimi's mother claims that French police underestimated the heinous nature of the group, which calls itself “Gang of Barbarians” and abducted her son in January 2006. At that time the police kept all information about the case secret. The abduction was only revealed on February 13, 2006, when a dying Halimi, naked and with burns all over the body, was found close to a railway in the southern suburbs of Paris. He died before arriving to the hospital.

According to the prosecutor, the gang followed a procedure it had applied nine times before: a young girl, then aged 17, seduced Ilan Halimi and drove him to an isolated location where the rest of the gang were waiting. They kidnapped him and asked Halimi’s family for a ransom. When they heard there would be a delay in the payment, they became unwilling to wait, and burned Ilan with alcohol and stabbed him to death.

The suspected mastermind of the gang, Youssouf Fofana, escaped to his native Ivory Coast after the murder in 2006. Cooperation between local and French police soon led to his arrest and extradition. Back in France he was soon condemned to one year of prison for insulting a French magistrate.

Fofana asks to be called “Osama” or “Mohammed” and is currently kept under isolation in the Paris prison La Sante. If found guilty, he faces life imprisonment for having personally stabbed and burned Halimi, leading to his death. His 26 accomplices could face a maximum of 15 years in jail depending on their level of involvement in the killing.

On Feb. 26, 2009, around 10,000 French citizens held a rally in Paris against anti-semitism, commemorating Ilan Halimi's death. His murder took place just several months after riots in the suburbs of Paris, which were started by violent youths.