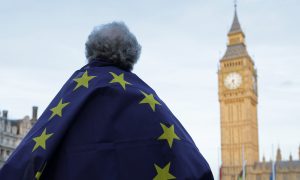 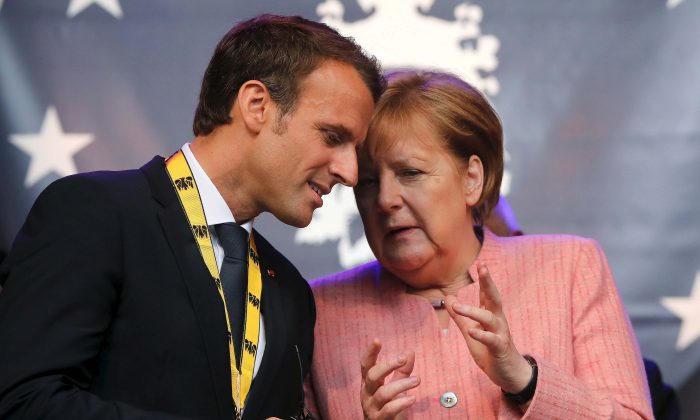 France and Germany Approve Extension of Treaty to Shore Up EU

BERLIN—France and Germany have agreed to deepen a 1963 treaty of post-war reconciliation, in a bid to show that the European Union’s main axis remains strong and to counter growing euroskeptic nationalism among some other members.

The extension to the Elysee Treaty, approved by the German and French cabinets, will be signed by Chancellor Angela Merkel and French President Emmanuel Macron in the German border city of Aachen, a historical symbol of European concord, on Jan. 22.

“Both states will deepen their cooperation in foreign affairs, defense, external and internal security, and development and at the same time work on strengthening the ability of Europe to act independently,” states the treaty text, seen by Reuters.

In Paris, Macron’s office said the Elysee Treaty extension would help both European powers tackle “the challenges they will be confronted with in the 21st century.”

“[We] envisage deepening our engagement in favor of security and prosperity of our peoples in the framework of a more sovereign, united and democratic Europe,” it said.

The treaty extension, negotiated over the past year though short on details, stipulates that it will be a priority of German-French diplomacy for Germany to be accepted as a permanent member of the United Nations Security Council.

Germany has for years sought greater influence within the international body, to which its closest allies—the United States, Britain, and France—belong.

While making clear that Germany and France remain committed to the EU and the NATO defense alliance, the agreement also signals that Berlin and Paris will combat efforts by some nationalist politicians in Europe to erode the 28-nation EU.

On Jan. 9, Italian Deputy Prime Minister Matteo Salvini said he wanted his country and Poland to join forces to reshape Europe in his quest for a euroskeptic alliance ahead of the European Parliament elections in May.

Merkel and Macron are keen to head off any breakthrough for euroskeptic parties in the European Parliament vote.

The treaty further outlines closer cooperation between national intelligence services and police in fighting terrorism and organized crime, and a commitment to moving toward economic convergence.

“Both states will deepen the integration of their economies towards a German-French economic area with common rules,” said the treaty text, referring also to calls for the harmonization of economic law. In addition, they will set up a panel of experts to give economic recommendations to each government.

Other areas of cooperation include culture, health, innovation, and transport.

Aachen, the venue for the signing ceremony, was the residence of Charlemagne, often called the “father of Europe,” who managed to unite much of western Europe in the early ninth century.