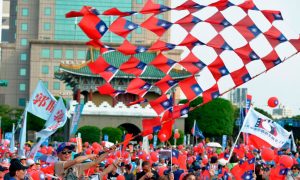 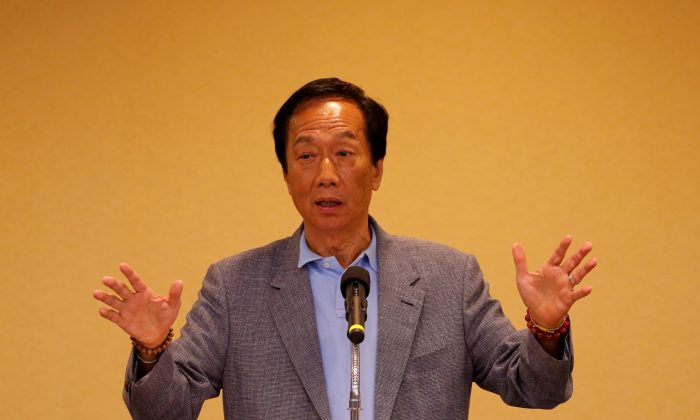 Foxconn Technology Group founder and chairman, Terry Gou, speaks during a news conference after his trip to the U.S., in Taipei, Taiwan on May 6, 2019. (Tyrone Siu/Reuters)
Asia & Pacific

TAIPEI–Terry Gou, the founder of Apple supplier Foxconn, quit Taiwan’s main opposition party on Sept. 12, paving the way for a possible bid to stand in a presidential election as an independent, complicating President Tsai Ing-wen’s prospects.

Gou, Taiwan’s richest person with a net worth of $7.6 billion according to Forbes, has extensive business interests in China.

He is also known for asserting that self-ruled Taiwan is part of “one-China,” while acknowledging Taipei and Beijing have their own interpretations of what that means.

But he has also said that “one country, two systems”—the model by which Beijing currently rules Hong Kong and that the Chinese regime has proposed for asserting sovereignty over Taiwan—is not a viable option.

Nonetheless, Beijing would likely welcome his bid to challenge Tsai, who Beijing views as untrustworthy. Tsai, of the Democratic Progressive Party, is hoping to win a second term in next year’s election.

Gou announced his intention to contest the presidential election in April as the candidate for the China-friendly opposition Kuomintang (KMT). But he lost his bid to win the party’s nomination in July.

That raised speculation he would enter the presidential race as an independent but Gou’s aide, Tsai Chin-yu, told reporters in Taipei his decision to resign as a member of the KMT was not linked to a decision on whether to run for president.

She cited disappointment with the leadership of a party which she said had become “outdated.”

The KMT said it “deeply regretted” Gou’s decision and urged unity within the party to win the election.

Two people familiar with Gou’s thinking said the 68-year-old billionaire was set to announce his bid to become president as an independent candidate by a Sept. 17 deadline for nominations.

Gou would appeal to voters who are dissatisfied with Taiwan’s economy and in favor of closer ties with Beijing, one of the sources said.

Relations with Beijing, which have cooled since Tsai became president in 2016, are bound to dominate Taiwan’s election.

Beijing suspects Tsai of pushing for Taiwan’s formal independence although she denies that.

Beijing considers democratic Taiwan a wayward province and has never renounced the use of force to take it over.

Analysts say Gou’s links to China might put off some voters, especially those who are increasingly wary of Beijing’s ambitions to absorb the island.

Gou stepped down as chief of Foxconn this year, handing over the running of the company to an operations committee. But he retained a seat on the board of the company, formally known as Hon Hai Precision Industry Co. Ltd.

Shares of Foxconn rose 1.6 percent on Thursday, beating the benchmark index’s 0.3 percent rise. They are down about 20 percent since Gou announced his presidential bid in mid-April.

Analysts say a bid by Gou to become president as an independent could split the KMT, whose presidential candidate, Han Kuo-yu, is struggling in opinion polls.