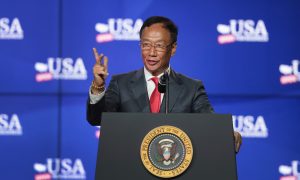 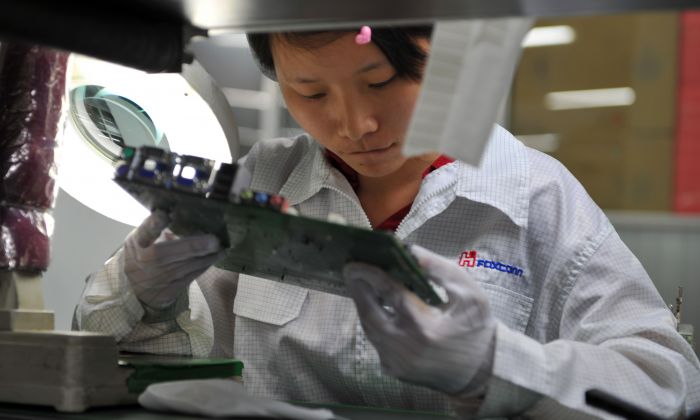 A worker inspects motherboards on a factory line at the Foxconn plant in Shenzhen on May 26, 2010. (VOISHMEL/AFP/Getty Images)
China Business & Economy

After U.S. authorities added Huawei and its affiliates to a trade blacklist, different sources have begun reporting falling demand for the Chinese tech giant’s smartphones.

Ming-Chi Kuo, an analyst at TF International Securities, a financial services group in the Asia-Pacific region, estimated on June 1 that monthly sales of Huawei phones will reduce by 8 million to 10 million due to the U.S. export ban, which will take effect in mid-August. After the ban is effective, Huawei’s phone sales may fall even more if the company is not able to purchase reliable tech components from the market.

Foxconn is the world’s largest smartphone foundry. Huawei manufactures about 10 percent of its smartphones on its own. The other 90 percent are assembled by Foxconn, Flex, and BYD, a Chinese foundry and automobiles manufacturer. Flex manufactures Huawei phones at its factories in China and India.

The anonymous sources said that after as Huawei received less orders for its smartphones, Foxconn had to reduce production in China accordingly.

The insiders explained that so far it’s unclear whether the reduction is temporary or long-term, as it is normal for a brand owner to reduce or increase production based on market needs.

Terry Gou, Foxconn chairman refused to comment directly on the issue when asked by reporters during a press conference in Taipei City, Taiwan. Gou is also running in the Taiwan presidential primaries and spoke at a campaign event on June 3.

He said: “You should ask Foxconn regarding issues about Foxconn. I’m a primary candidate of the Kuomintang Party today.”

But he also indirectly addressed the Huawei ban, saying: “There are more companies than one that are being impacted by Huawei [ban], in many aspects,” adding that “[each Huawei supplier] is calculating whether they use more than 25 percent of American technologies in their products.” Companies that sell 25 or more percent U.S.-origin tech would come under the ban.

Meanwhile, Japanese media Nikkei reported that the Singapore-based Flex, a Nasdaq-listed U.S. company, halted its manufacturing for Huawei smartphones and other devices on May 23.

The company said it halted the production to ensure the company’s compliance with the ban. A “majority” of products have since restarted.

“We have resumed shipments for the majority of the products we assemble for Huawei, after determining that these products are compliant and not covered by the new restriction,” Flex stated.

But Chinese media found that the situation at Flex’s Chinese factory is different.

Chinese web portal Sohu reported on June 4 that Flex manufactures about 30 percent of Huawei smartphones, mainly at its factory in Zhuhai City, Guangdong Province. According to witnesses, Huawei arranged about a hundred trucks to pick up raw materials from Flex Zhuhai on May 20, so that Huawei could use the materials to manufacture phones itself. Some of Flex Zhuhai’s workshops have closed since May 22, the witnesses said.

This is because Huawei phones are supported by U.S. technology. Google, developer of the Android operating system found in Huawei smartphones, announced that it would suspend its business with the Chinese firm. Losing access to Google’s products means Huawei phones would no longer be able to access popular apps such as Gmail and Google Maps.

So far, Qualcomm, Intel, Broadcom, Xilinx, Qorvo, Lumentum, Synopsys, Infineon, ARM, Toshiba, and other suppliers have also announced that they would suspend their business with Huawei to comply with the U.S. ban.

To allow time for software updates in existing Huawei products, the U.S. Commerce Department granted the company a temporary exemption for 90 days.

But prices of second-hand Huawei smartphones have already dropped dramatically, according to reports from Europe, Japan, and Taiwan.