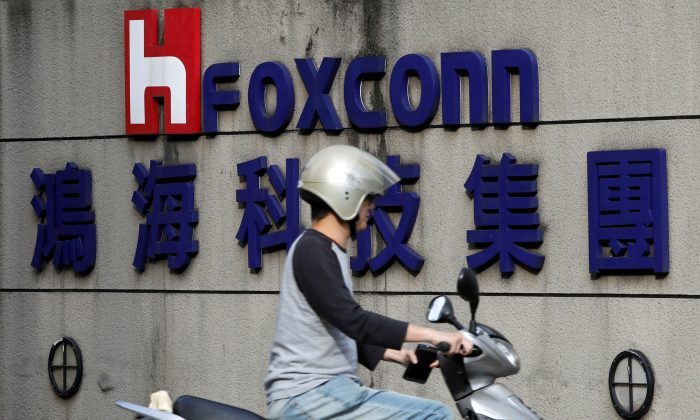 A motorcyclist rides past the logo of Foxconn, the trading name of Hon Hai Precision Industry, in Taipei, Taiwan, on March 30, 2018. (Tyrone Siu/Reuters)
By Reuters

TAIPEI–Foxconn, the world’s top contract electronics assembler, said it had enough capacity outside China to meet Apple’s demand in the American market if the need should arise for the iPhone maker to adjust its production lines due to the U.S.-China trade war.

The comments come as President Donald Trump has threatened to slap further tariffs on $300 billion worth of goods from China—where the bulk of Apple’s devices are assembled. The country is also a key market for the firm.

“Twenty-five percent of our production capacity is outside of China and we have enough capacity to meet Apple’s demand in the U.S. market,” a member of the Taiwanese firm’s proposed new board, Liu Young-way, said on June 11. He added that if Apple needs, Foxconn could adjust its production lines accordingly.

Liu was speaking at Foxconn’s first investor conference in Taipei, where the company also said it was well positioned to tackle the “increasingly tough” trade war situation with its production lines across 16 countries.

The trade war “will have some impact, but it will be limited,” Liu said.

He also emphasized that Foxconn’s investment in Wisconsin was more important than before given the trade war. The firm is already under the spotlight for having failed so far to meet job-creation targets in the U.S. state.

Reuters exclusively reported last week on the overhaul, which marks a major shift in Foxconn’s corporate leadership that has seen 68-year-old Gou hold a tight grip on the firm’s daily operations and strategic decisions.

Gou told Reuters in April that he planned to step down from Foxconn to pave the way for younger talent to move up the ranks.

Foxconn will now get an “operations committee,” that will give nine senior executives from the group’s subsidiaries greater control. It will meet once every week.

The committee did not include Gou or the chairman of Foxconn’s Japanese electronics unit Sharp Corp, Tai Jeng-wu, who are both members of the new proposed board.

Two people with direct knowledge of the matter said Tai had resigned from the committee to avoid possible conflict of interest between parent Foxconn and its Japanese unit.

Foxconn did not provide a reason for Tai’s absence.

Investors are keen for any insight into succession plans at Foxconn and what it means for plans laid out by Gou such as the $10 billion investment to create 13,000 jobs in Wisconsin and an $8.8 billion display factory in southern China.

Liu said the Wisconsin investment, which is expected to reach $1.4-1.5 billion with up to 2,000 employees by end of 2020, was on schedule. He added the project, which includes manufacturing of displays and servers, was poised to go into production by end of next year.

Foxconn shares have dropped around 20 percent since Gou announced in April his plans to run for president. They closed up 0.4 percent on Tuesday, in line with the broader index.