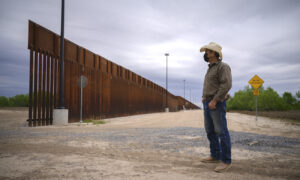 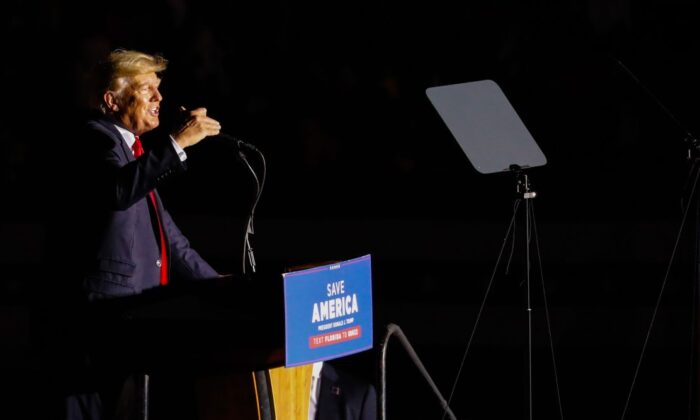 Fourth of July ‘Will Not Be Canceled,’ Trump Says at Campaign-Style Rally

Former President Donald Trump, in a campaign-style rally in Florida, proclaimed that the Fourth of July holiday “will not be canceled” in light of left-wing sentiments against Independence Day.

“Tomorrow we will celebrate 245 years of glorious American Independence: It will not be canceled, by the way,” the former president said on Saturday night. “And we will teach young people across the country that George Washington, Abraham Lincoln, Thomas Jefferson, John Adams, Benjamin Franklin, John Hancock will forever be American heroes.”

During his speech to supporters, Trump didn’t mention any specific attempts to cancel Independence Day.

Years ago, Trump accused leftists of trying to cancel the phrase “Merry Christmas” as part of a broader culture war.

Trump on Saturday made reference to the names of the Founding Fathers and other prominent Americans being scrubbed from government buildings. Several years ago, the San Francisco Unified School District Board of Education faced criticism for including Abraham Lincoln High School on a list of schools that could be renamed, despite Lincoln having freed most of the United States’ slaves with the Emancipation Proclamation.

“People want to take their names off buildings,” Trump told the crowd in Sarasota. “Can you believe it? They took names of buildings like George Washington. And I told you this is where they’re coming from.”

The former commander-in-chief added: “We’re not going to let that happen. They will never be purged from history or canceled from our hearts.”

“What was once a unifying symbol—there is a star on it for each state, after all—is now alienating to some, its stripes now fault lines between people who kneel while ‘The Star-Spangled Banner’ plays and those for whom not pledging allegiance is an affront,” the article stated, suggesting that people who fly the American flag often are Republicans or Trump supporters.

Trump also touched on a number of issues during the rally, his second since departing the White House earlier this year. The former president held a rally in Ohio in June to support former aide Max Miller’s congressional bid.

“They’ve mobilized every power of government to come after me, my family, my wonderful employees, and my company solely because of politics,” Trump told the crowd, referring to the indictment led by the Manhattan District Attorney’s Office against the Trump Organization’s chief financial officer, Allen Weisselberg, last week.

It’s still not clear whether Trump will attempt to run for president in 2024, but the former president offered a hint.

“We are looking at the election, more than looking at it,” said Trump of a possible 2024 campaign, prompting cheers.

The federal government blocked this year’s fireworks display over Mount Rushmore in South Dakota. Republican Gov. Kristi Noem had sought the display earlier this year but was denied, triggering a lawsuit from the governor.

Meanwhile, some municipalities in local areas also canceled Independence Day fireworks displays amid restrictions brought about by the COVID-19 pandemic. Some cities have canceled the displays due to the threat of extreme fire danger and drought conditions, among other reasons.

However, Reuters reported two of the biggest fireworks shows in the country will be displayed over the National Mall in Washington, D.C. and along New York City’s East River.