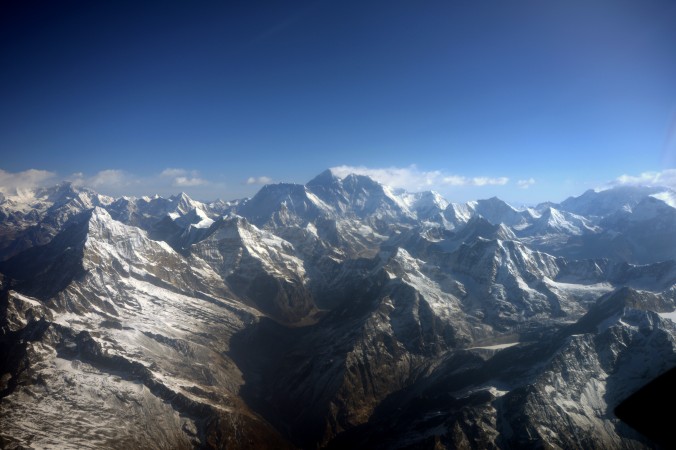 This photograph taken from an aircraft shows an aerial view of Mount Everest (C) and The Himalayan mountain range. (Prakash MathemaAFP/Getty Images)
International

The four who perished are: 25-year-old Phurba Sherpa, who fell on Thursday; 36-year-old Eric Arnold, who is believed to have suffered a heart attack on Friday, and both 44-year-old Subash Paul, and 34-year-old Maria Strydom, who perished from altitude sickness on Saturday, May 21.

The two missing are believed to be from India, Paresh Chandra Nath and Goutam Ghosh, according to a CNN report.

May is the most common month to attempt a climb because there is usually less wind—but it’s not any warmer, with temperatures hovering from -30 to -5 depending on the altitude.

April 2016 was the first month climbers were allowed to attempt to reach the summit for two years—ascents were halted in 2015 due to the earthquake that devastated Nepal, and in 2014 after 16 Sherpas were killed in one day during an avalanche. Sherpa are a local ethnic group that populates the high-altitude Himalayas and often help guide foreign climbers.

Nepalese authorities have since implemented stricter regulations on climbers wishing to scale Everest.

“If you have to be hauled up the mountain you don’t really belong on Everest,” said Frits Vrijlandt, president of the International Climbing and Mountaineering Federation (UIAA), in a statement in November 2015.

“Everest should become a mountaineers’ mountain again,” said Vrijlandt. “We support the requirement restrictions on age (denying access to those under 18 and over 75) and the minimum requirements regarding physical and mental ability to assure you are able to climb by yourself or with a partner.”

Both the UIAA and the Nepal Mountaineering Association (NMA) hoped the measures would “drastically improve safety on an increasingly overcrowded mountain, lessen pressure on guides who are often reduced to risking their lives assisting ill-prepared climbers, and restore a sense of dignity and glory to Everest.”

A CBS report states that more than 30 climbers who attempted to top the summit recently have developed frostbite, or became ill from altitude-sickness.

Thousands have reached the summit since the first recorded ascent by New Zealander Edmund Hillary and Sherpa Tenzing Norgay in 1953—but more than 250 have died in their attempts since.

He said that as you approach and top 26,000 feet “your body just simply can’t regenerate, and every minute spent above that altitude puts you—without trying to be too dramatic here—puts you closer to death. The margin for error drops to zero.”