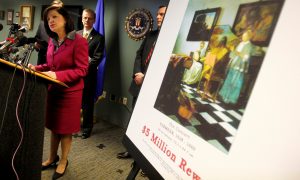 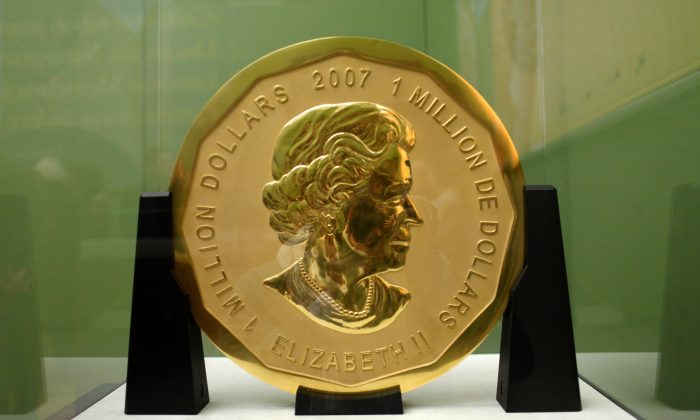 Four men in Germany are on trial for the spectacular theft of a gold coin so massive a wheelbarrow was used to make off with the loot.

The suspects are accused of stealing the Canadian “Big Maple Leaf” coin—worth millions—from Berlin’s Bode Museum in March 2017, in a brazen scheme that made global headlines.

Three of the men, identified only as Wissam R., Ahmed R., and Wayci R., face charges of theft, German news agency DPA reported, and are alleged to be members of a notorious crime family.

The fourth suspect—former museum security guard Dennis W.—stands accused of scouting the scene and supplying information critical to pulling off the successful heist.

The four suspects, who are between 20 and 24 years of age, went on trial on Jan. 10 in a Berlin district court.

The thieves made their way into the Bode Museum in the early morning hours of March 27, 2017.

Equipped with a ladder, wheelbarrow, and climbing gear, the burglars ran along an elevated railway track, Deutsche Welle reported, leaned the ladder up against an upper-story window, and sneaked into the building through an unlocked staff room.

They smashed the glass display case, rolled the coin over to the window, and allegedly heaved the heavy item out and onto the tracks below. Investigators reportedly found a deep impact mark on the tracks, suggesting the coin had been dropped and damaged.

The thieves then apparently placed the coin in the wheelbarrow and wheeled it across the Spree River bridge along the tracks. They are believed to have then used a rope to rappel off the bridge and into an adjacent park then getting into a waiting car and vanishing.

Investigators later found the rope, ladder, and wheelbarrow in an underground garage, along with a burning Mercedes.

Police have found no trace of the gold coin.

Authorities cited by AFP believe the solid gold coin—stamped with a nominal value of CA$1 million but estimated to be worth over CA$5.2 million (US$4 million)—was either taken abroad or “cut into small pieces.”

Minted in 2007 and featuring the likeness of Queen Elizabeth II, the precious piece was the world’s second-largest gold coin and one of five in existence.

It weighed 220 pounds and was made of pure gold. Alternatively dubbed the “Million Dollar Gold Coin,” it was described by gold trading service GoldCore as the “world’s purest gold coin and in the Guinness Book of Records for its purity of 99999 fine gold.”

An unidentified collector had loaned the multi-million-dollar item to be shown off to the public alongside other items in the museum’s exhibition billed as a “chronicle of human history forged in metal.”

Besides its value as a collector’s item, the pilfered coin was “legal tender, investment grade, bullion coin,” GoldCore wrote, adding that it “should be stored in secure vaults, in safe jurisdictions.”

Experts cited by Deutsche Welle said the thieves would have had a hard time selling the distinctive 21-inch coin as is, and probably melted it down.

“The accused allegedly split the gold coin and sold the pieces,” prosecutors wrote in a criminal indictment seen by AFP reporters, after likely damaging it first by dropping it on the ground twice.

The museum was insured against the theft.

The four men were arrested in July 2017 by German special forces, with the Irish Times reporting that along with the suspects, security operatives seized several vehicles, four shotguns, and a six-figure sum of money.

Three of the men facing trial are said to be members of the Remmo clan, a Lebanese family with criminal links in Berlin. All three had a history of criminal offenses.

Organized crime experts told the Irish Times the accused will likely stay silent and refuse to cooperate with the prosecution, in line with the local mafia code.

Guilty verdicts for the three alleged Remmo clansmen could yield sentences of up to 10 years behind bars.