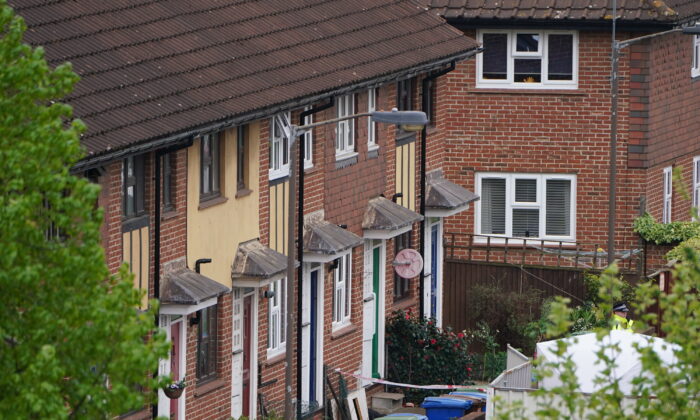 Police activity outside a house where three women and a man were stabbed to death, in Bermondsey, southeast London, on April 25, 2022. (Kirsty O’Connor/PA Media)
UK

Three women and a man have been killed in a “devastating” stabbing attack at a house in southeast London.

The victims were all pronounced dead at the scene in Delaford Road, Bermondsey, in the early hours of Monday.

A man in his late 20s, who was known to them, has been arrested on suspicion of murder and remains in custody.

Venecia Reid, the niece of one of the women who died, told reporters at the scene: “She was very loving, very kind, very generous.

“She worked very hard in this country to support her two girls and her two grandkids.

“She does not deserve this.”

Metropolitan Police Chief Superintendent Colin Wingrove, who is the commander for the borough of Southwark, said: “I want to offer my heartfelt condolences to the family and friends of all those concerned.

“This is a deeply shocking incident and we will do everything we can to provide support to everyone affected at this difficult time.

“Such terrible events are rare. But this will not diminish the shock that we felt across London and beyond.

“And I can assure you this investigation will be thorough to ensure justice for the victims and their families and the community.”

Anne Birkett, 60, whose back bedroom looks on to the property where the victims were found, said she was woken by police sirens and a circling helicopter just before 2 a.m.

Birkett told the PA news agency: “It’s devastating—you hear all of this but you never assume it’s going to be right on your own doorstep.

“I’m a foster carer and I’ve got children in my care, and now I’ve got to protect them now because of what’s happened.”

A resident of the adjacent road, Bramcote Grove, who did not want to be named, said he was woken at around 2 a.m. by police sirens and a helicopter and was kept up until 6 a.m. by the commotion.

“When I saw four ambulances—not one, not two, but four—I knew it was serious,” he said.

Part of the residential street was closed off with metal hoarding and a number of forensic tents had been put up as police carried out their investigations on Monday.

London Mayor Sadiq Khan said: “I am heartbroken that three women and a man were killed last night in a devastating incident at an address in Southwark.

“My thoughts are with the family and friends of those who have lost loved ones in this awful crime.

“I am in contact with the leadership of the Metropolitan Police.

“An investigation is underway and one man has been arrested. I urge anyone who has information that could be relevant to contact the police immediately.”

Local MP Harriet Harman described the killings as a “terrible tragedy,” telling reporters at the scene: “Tragically, four people have been killed and that is shocking to happen anywhere but especially in this very peaceful, quiet, very settled community here.

“The police have arrested someone but it’s really important still that people give information—any information they’ve got—to the police so that whoever committed this horrific crime can be brought to justice.

“It’s a terrible tragedy and our thoughts are with the family and friends of those who’ve tragically had their lives cut short.”

The Metropolitan Police said officers were called to reports of a disturbance at around 1:40 a.m., and when they forced entry to the house they found four people with fatal stab injuries.

A spokeswoman for London Ambulance Service said: “We were called at 02:07 a.m. today to reports of an incident on Delaford Road, Bermondsey.

“Our team worked closely with colleagues from other emergency services.

“Sadly, despite the best efforts of our medics, four patients died at the scene.”