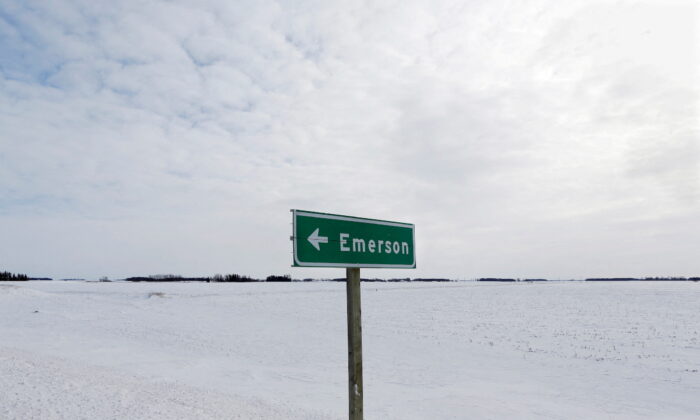 A sign post for the small border town of Emerson, near the Canada-US border crossing in Emerson, Manitoba, Canada, on Feb. 1, 2017. (Lyle Stafford/Reuters)
Canada

U.S. authorities on Thursday charged a man with human smuggling of Indian nationals from Canada, the day after four people including a baby were found frozen to death in a remote part of Canada close to the Minnesota border.

The U.S. attorney’s office in Minnesota said 47-year-old Steve Shand had been arrested just south of the border on Wednesday while driving two undocumented Indian citizens.

U.S. border patrol agents soon came across five more Indians traveling on foot, one of whom was carrying a backpack belonging to a family of four who had become separated from the group as they all tried to cross the border.

They alerted Canadian police who found the victims—a man, a woman, a teenage boy and a baby—about 40 feet from the frontier with Minnesota. First indications are that they died from exposure to the cold.

Wind chill had driven down the temperature to minus 31 F (minus 35 C), she said.

The U.S. attorney’s office said in a statement that the four victims had tentatively been identified as the missing Indian family.

The five Indian nationals explained they had walked across the border expecting to be picked up by someone and estimated they had been walking around for over 11 hours.

Shand has been charged with one count of human smuggling. He is next due in court on Jan 24.