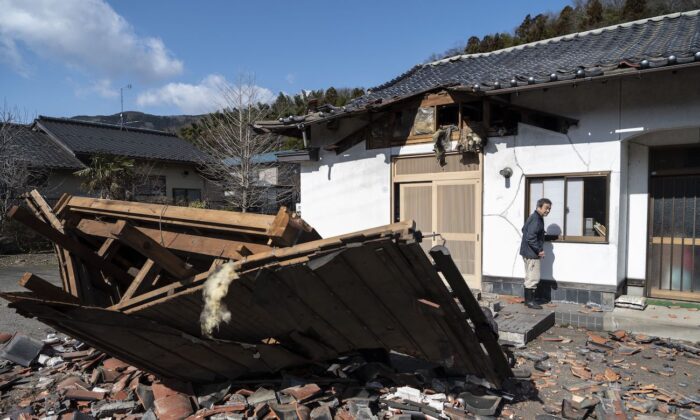 At least four people have been killed and millions more were left without power after a magnitude 7.4 earthquake struck Japan’s northeast coast off Fukushima on March 16.

Government spokesman Hirokazu Matsuno confirmed the four deaths and said 107 people were injured, adding that officials are investigating whether the deaths occurred as a direct result of the earthquake.

The earthquake hit at around 11:30 p.m. local time off the coast of Fukushima prefecture and had a preliminary epicenter depth of 60 kilometers (37 miles), Japan’s Meteorological Agency said. It was proceeded minutes earlier by a 6.1-magnitude temblor in the same area.

The quake was reportedly felt across large swaths of the country, with injuries reported in Miyagi and Fukushima as well as Kanagawa, Ibaraki, Iwate, Akita, Tochigi, and Yamagata prefectures, according to local reports.

“We’re doing our best to assess the extent of the damage,” Matsuno told reporters overnight. “Major aftershocks often happen a couple of days after the first quake, so please stay away from any collapsed buildings … and other high-risk places.”

Video footage shared to social media showed buildings and other infrastructure violently swaying, while photos showed some of the damage caused to buildings, including a supermarket where the roof collapsed.

Japan’s Meteorological Agency issued a tsunami warning along the coasts of Fukushima and Miyagi and urged people to stay away from the sea or the coast. Tsunami waves of up to 30 centimeters (about 11 inches) were earlier measured in Ishinomaki Port in Miyagi Prefecture, the agency said.

The agency, which lifted its low-risk tsunami advisory on March 17, also upgraded the magnitude of the quake to 7.4 from a preliminary 7.3 but warned that earthquakes of a similar scale could occur in hard-hit areas over the next week or so.

Japan’s prime minister, Fumio Kishida, said the government would be on high alert for the possibility of further strong tremors over the next two to three days.

Kishida said the earthquake knocked out power to more than 2 million customers across the country. Utility Tokyo Electric Power Company said 700,000 of those were in the capital.

Tohoku Electric Power said around 36,400 homes were still without power early on March 17, although the majority of households in Tokyo had regained power almost immediately after the quake.

According to local reports, the quake caused the derailment of a high-speed bullet train.

The Tohoku Shinkansen train had about 100 passengers on board when it derailed between Fukushima Station and Shiroishizao Station, although no injuries have so far been reported. Officials haven’t yet said when service on the derailed portion of the train track will resume.

Among those dead included a man in his 60s in Soma city who fell from the second floor of his house while trying to evacuate, Kyodo News reported. Another man in his 70s allegedly suffered a heart attack after panicking, according to the news outlet.

The earthquake occurred just days after the 11th anniversary of a similar disaster in 2011 when the same region of northern Japan was struck by a deadly 9.0 magnitude earthquake and tsunami that triggered nuclear plant meltdowns and left more than 22,000 people dead.

It struck around 89 kilometers (55 miles) from the Fukushima Nuclear Power Plant, which is in the process of being decontaminated and decommissioned following the 2011 disaster which knocked out the Fukushima Daiichi plant’s cooling systems, triggering the meltdown of three reactors.

Plant operator Tokyo Electric Power Co. Holdings said it had found no abnormalities at the site.