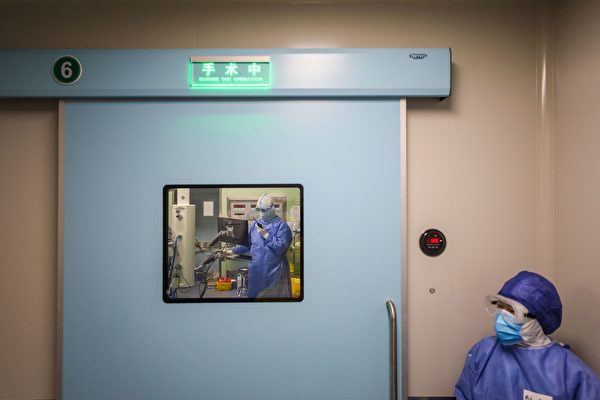 A general surgery room at Wuhan Union Hospital where a teacher received a heart transplant only four days after being placed on the donor waitlist. The hospital is suspected of participating in the regime's crime of forced organ harvesting. (STR/AFP via Getty Images)
Organ Harvesting in China

A teacher at Lanzhou University in China recently received a heart transplant four days after being placed on the donor waitlist. The waiting period for a heart transplant in the United States is 180 days to years. The short wait period in China has aroused suspicions of forced organ harvesting.

On April 8, Mu Jiangang, a teacher at Lanzhou University, suffered a myocardial infarction and was rushed to the hospital to have the blood clot dissolved and a heart stent, to keep the blood vessel open, inserted. On April 28 he was rushed back to the hospital and put on an ECMO (extracorporeal membrane oxygenation) machine. He was diagnosed with a large heart infarction and required a heart transplant.

On May 6, Mu was transferred to China’s top organ transplant hospital, the Wuhan Union Hospital, which is affiliated with the Tongji Medical College of Huazhong University of Science and Technology. He was placed on the waitlist for a donor heart.

Only four days after entering the hospital a suitable donor heart was obtained and the transplant was completed. After his surgery, Mu was transferred to the intensive care unit.

A suitable donor organ was found for Mu quickly. In the United States, where medical technology is more developed and the organ donor system is highly efficient, the wait time usually exceeds 180 days, and many patients have died before a suitable donor heart is found.

Mu’s fast heart transplant was not a matter of luck or coincidence. In China, there is a growing body of evidence to suggest the Communist regime keeps in reserve healthy individuals for use as organ donors.

Consider the story of Sun Lingling, a 24-year-old woman who became the subject of media reports in mainland China for her rapid heart transplant.

Sun’s story begins in June 2020. After becoming ill while working in Japan and being on an ECMO for nine months, she was flown back to China and admitted to the Wuhan Union Hospital on June 12. Within thirteen days, the hospital had already found four hearts for her.

The first donated heart arrived at the hospital on June 16, but the surgeons rejected it claiming the coronary arteries were not in good condition. The second heart arrived on the 19th and was also rejected since Sun had a fever and her health condition was not suitable for a heart transplant.

On the 25th, Sun’s condition had noticeably improved just as the final two donor hearts arrived. The third heart, from a local female, was also rejected. The heart finally chosen was from a 33-year-old male who lived hundreds of kilometers away.

Within just 13 days, Sun had four hearts available for her surgery. She would live on, while the four donors did not.

On April 4, 2021, the World Organization to Investigate the Persecution of Falun Gong (WOIPFG) released an investigative report stating there are suspicions that the hospital is participating in the crime of harvesting the organs of living Falun Gong practitioners and other prisoners persecuted by the CCP.

In a previous interview with The Epoch Times, Dr. Torsten Trey, executive director of the medical ethics advocacy group Doctors Against Forced Organ Harvesting (DAFOH), said Sun Lingling’s unprecedented short wait for four donor hearts should be a cause for international alarm.

He calls Sun’s case “beyond explanation.” It “rather follows an ‘on-demand system.’”