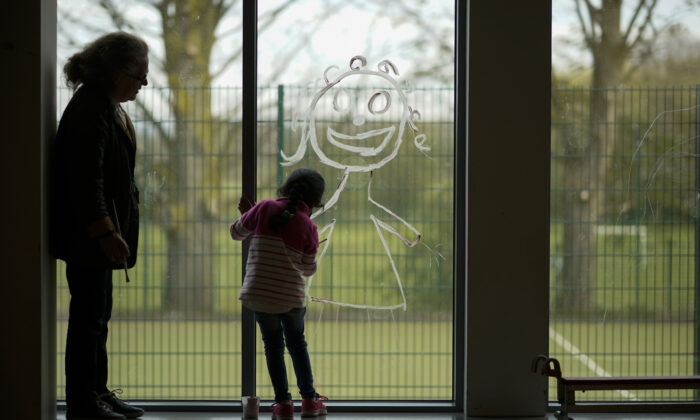 A young girl paints a picture of herself on the school window as children of key workers take part in school activities at Oldfield Brow Primary School in Altrincham, England, on April 8, 2020. (Christopher Furlong/Getty Images)
UK

Barnardo’s published an urgent appeal on Tuesday, asking people to consider becoming foster carers after the charity was inundated with referrals.

The charity said that the number of children referred to its fostering services across the UK over the 12 months to July 31 shot up to 19,144—36 percent higher than the previous year’s number of 14,130.

Barnardo’s said in a statement it is keen to hear from people who would consider caring for siblings and people from “all backgrounds from around the UK, including black, Asian, and minority ethnic [BAME] and LGBT+ communities.”

The number of sibling groups referred to Barnardo’s foster services increased by 31 percent in the year ending July 31.

A YouGov survey commissioned by Barnardo’s shows that 14 percent of the UK’s adults would consider fostering a child in the next five years, but only 6 percent said they would consider caring for siblings.

Meanwhile, 70 percent of the respondents said they believed it was important that they and their sibling were together when they grew up, and 60 percent of respondents who had a sibling said it would have had a negative impact on them if they had been separated while growing up.

Appealing to potential foster carers from diverse backgrounds, Barnardo’s said “it is vital to increase the numbers of foster carers to ensure that when a child needs a loving, stable, and safe family, the right carer is available to meet their needs and give them the care and stability they deserve.”

It’s not clear if the number of children referred to foster services from BAME or LGBT+ families increased at a similar rate with those from other groups.

While government restrictions during the pandemic were largely similar across the four nations, England suffered the worst wave of family breakdowns during the 12-month period, with the number of children referred to Barnardo’s fostering services increasing by 40 percent. Northern Ireland and Wales saw a 20 percent and 5 percent increase respectively, but total referrals in Scotland decreased by 17 percent, suggesting factors other than lockdown policies were at play.

The Epoch Times has reached out to Barnardo’s for comment.