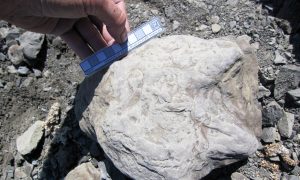 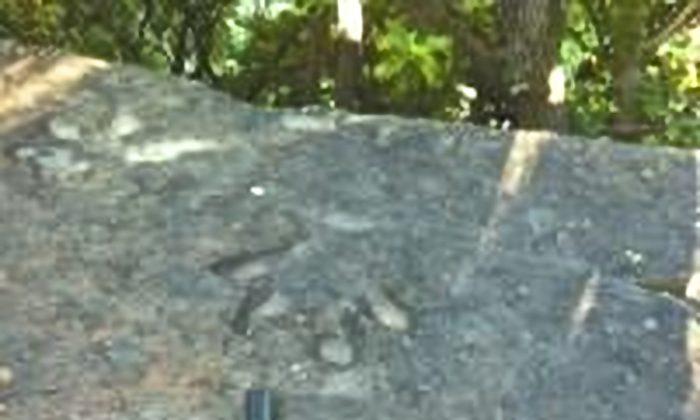 A fossil researcher says he knew the identity and location of almost all the dinosaur tracks in China, until he studied new prehistoric footprints in Panzhihua City of China’s southwestern Sichuan Province last month.

Xing Lida from the China University of Geosciences told Sichuan-based Huaxi Metropolitan Daily that the tracks do not appear to be dinosaur tracks, and he believes the reptilian track maker could be related to a prehistoric archosaur called the “hand beast.”

He explained that these footprints reveal similar morphology to the hind prints of the hand beast, so named because of its five-fingered footprint, which resembles a human hand.

Xing is one of many researchers and scientists recently studying the footprints, which were discovered last year by Li Xuezhi, chair of the Panzhihua Photographic Association.

The 210 million year-old footprints, located on a hill in Sichuan Province, were found in a gray-purple siltstone in a 100 square foot eroded area. The track site consists of more than 10 successive tracks, with the track size being approximately 18 inches long.

Li also did not believe the tracks were made by a dinosaur.

“The tracks look very different in shape from those shown in some dinosaur books. These strange fossils have a four-toe shape while dinosaurs frequently show a three-toe pattern—occasionally a five-toe shape,” he told the paper.

The newly found footprints bear different toe impressions than the hand beast, which according to Xing was dominated by a nearly symmetrical toe arrangement from the second to the fourth toes, with the third longest and the fifth (outermost toe) stuck out the side.

The hand beast is generally attributed to a clade of archosaurs that first appeared in the Late Permian period (260 to 251 million years ago) and became known as the dominant animals on earth in the Triassic period (250 to 200 million years ago).

Given the large size of the imprints, Xing said the hand beast could have reached a total length of more than five meters and most likely fed on modest-sized dinosaurs.

Hand beast tracks were found at two locations in the Guanling Formation of Southwest China’s Guizhou Province in the early 1960s but were not correctly identified and adequately described until 40 years later.

Xing cautions that it is still too early yet to conclusively attribute these recent tracks to a Triassic archosaur, as it is still just a hypothesis.

“There are so many differences between the Sichuan tracks and the Guizhou tracks, that they have to be placed in two different groups of hand-beast-like vertebrates evolved from archosaurs,” Xing said.

He said it still remains uncertain whether this new reptile was actually hunting the smaller dinosaurs, which leaves even more puzzles unsolved.

“That’s just what’s so fascinating about these footprints,” Xing said.