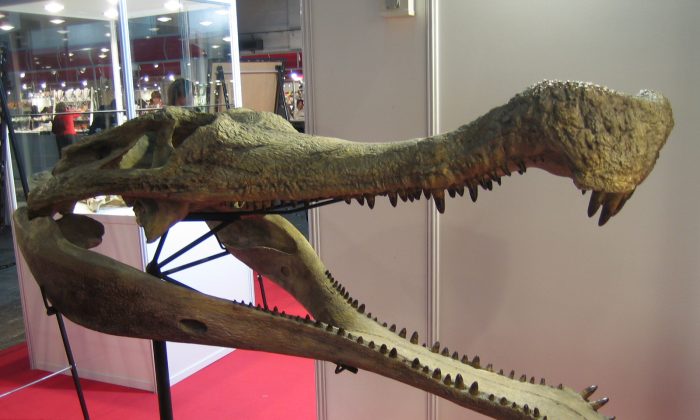 Scientists have discovered the fossilized remains of a Cretaceous-era crocodile in the Sahara Desert, Tunisia. The fossil is incomplete, but the newly named “Machimosaurus rex,” is estimated to be 31 feet (nearly 10 meters) long, making it the largest known ocean-crocodile in history.

The findings were published in the journal Cretaceous Research on Monday.

A diagram of the Machimosaurus rex next to a human scuba diver for scale.

“It’s just big. It’s almost the size of a bus,” Federico Fanti, one of the scientists that uncovered the fossil, told the Washington Post. “It definitely was at the top of the food chain at the time, at least in this particular locality.”

Still, the Machimosaurus rex is far from the biggest crocodile ever found. That title belongs to the freshwater Sarcosuchus imperator, which can reach a staggering 40 feet in length.

The discovery of the Machimosaurus rex, which is estimated to have lived around 130 million years ago, has important implications for whether the Jurassic-Cretaceous mass extinction, dated to 145 million years ago, actually happened.

Machimosaurus rex is the first fossil belonging to the teleosauroid group that dates to the Cretaceous era, which suggests that the mass extinction at the end of the Jurassic era was incomplete for many species that were thought to have been wiped out.