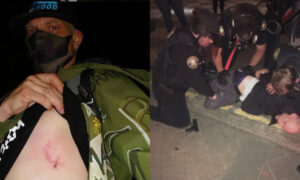 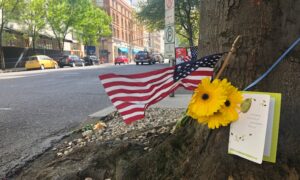 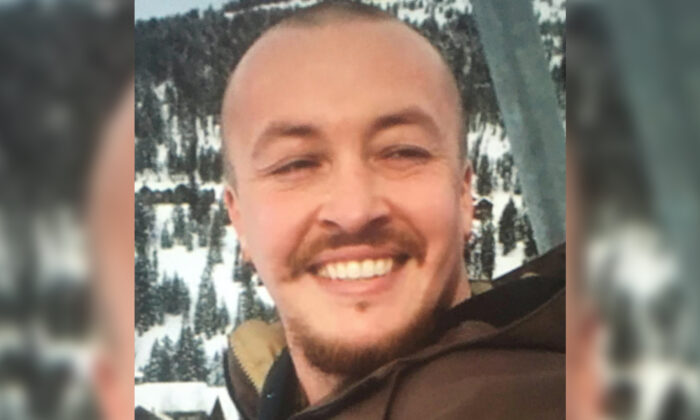 Aaron “Jay” Danielson in an undated photograph. He was shot dead in Portland, Ore., on Aug. 29, 2020. (Danielson family via AP)
US News

People who gathered for a memorial service to honor the life of Portland shooting victim Aaron “Jay” Danielson spoke about the importance of overcoming anger and hatred, and transcending the situation with forgiveness and courage as they mourned his death.

Danielson, 39, was shot in the chest and killed in downtown Portland on Aug. 29. The shooting occurred after the completion of a rally and caravan in support of President Donald Trump that traveled to Portland from nearby Clackamas County. The suspected killer, Michael Forest Reinoehl, 48, was later shot and killed by police in Lacey, Washington, on Sept. 4.

About 250 people gathered at Esther Short Park in Vancouver, Washington, for an afternoon memorial service on Sept. 5, just one day after what would have been Danielson’s 40th birthday. An evening candlelight vigil was held later in the day.

“I’m out here today for my friend Jay who was murdered,” attendee Haley Adams told The Epoch Times. “He was a loving man, he was very caring.”

She said she was “completely devastated” at the news of his death.

The founder of conservative group Patriot Prayer, Joey Gibson, spoke on stage at the memorial service. Danielson was a supporter of the group, and was reportedly wearing a Patriot Prayer hat when he was shot.

Gibson highlighted Danielson’s peace and courage, saying, “Jay was one of the most courageous people that I’ve ever met in my entire life. … Jay was always calm and was always had that smile on his face, even in the middle of that anarchy,” he said.

While acknowledging Danielson’s murder and accusing the media of having slandered his name after his death, Gibson urged for forgiveness and letting go of hatred.

“I don’t want to see one person going to Portland and create one act of violence in the name of Jay. …  Jay wants us to stand for what we believe in but he does not want any more violence,” he said.

“We’ve been robbed, I’ve had anger in my heart … I kind of had to have a reality check because I know Jay would not want that,” Dawson said.

“I encourage you and I want you to give him the justice that he deserves,” she told the crowd. “He was amazing. And I’m angry that the media wants to ruin his name, but by God, Patriot Prayer and every one of you standing here today, we will fight, we will fight to keep his good name.”

Chandler Pappas, a friend who was with Danielson when he died, told the crowd, “Jay was not a violent man. Jay was about peace and Jay was about love.”

Joni Van Dyne, who was part of the Trump 2020 Cruise Rally event on Aug. 29, expressed anger over media reports that painted Danielson as an extremist. She’d just met Danielson briefly prior to the rally event that day and said that he seemed like a “genuine person.”

“When I found out that they were saying Jay and all the Trump supporters were white supremacists, no, that’s far from it, we had Asians, Blacks, Mexicans, all kinds of different races and sexualities there. And everybody was treated the same,” she said.

Kareem Patton, a supporter of Patriot Prayer who had known Danielson, told The Epoch Times that Danielson was a “very kind guy, very easygoing.”

“If you’re having a bad day he’d just gravitate toward you and make you feel better,” Patton said. “He’s just that spark and that light around everybody, that’s how I knew him. I’m always having a smile and a laugh when he’s around. It’s a tragedy.”

He said that media coverage of Patriot Prayer that has been characterizing the group as being “far-right” or as advocating for white supremacy conflicts with his personal experience of the group.

“Patriot prayer for years had had people of color. We don’t allow racist people or extremist or violent people in the group at all. Media just had to [be] against Joey and everybody else,” he commented. “I know these people personally and they’re not like that.”

Patriot Prayer’s website says the group stands for “God and Freedom.” The group has regularly held demonstrations in Portland and Seattle, where they’ve faced opposition from Antifa, a far-left group, and other activists. Brawls between the groups aren’t uncommon.

Protests and riots have continued in Portland over the past several months since late May and have often been marked by vandalism and violence.

Roman Balmakov and Zachary Stieber contributed to this report.