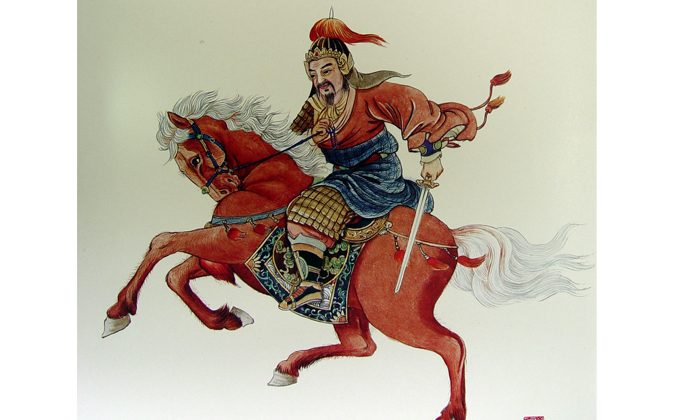 Fortify Your New Year’s Resolutions With These 5 Chinese Legends

Like any other commitment made to yourself, New Year’s resolutions may seem to be a dime a dozen, to be broken or forgotten on a whim. If you don’t want things to stay that way in the Year of the Monkey, read these five stories from the Chinese past to get some inspiration.

The Yellow River is known as China’s Sorrow because though its waters are the lifeblood of agriculture, frequent and difficult-to control flooding has caused millions of people to lose their lives and homes over thousands of years.

According to Chinese legend, one of the first men to remedy this longstanding problem was Yu the Great. For years, this emperor personally led his men to construct the dikes that would redirect the Yellow River and stabilize the geography of the North China Plains. It was said that, due to Yu’s dedication, his son only ever saw his father as he headed past their home on his way to work.

The extreme focus and industriousness that Yu the Great demonstrated for his people’s well-being was continued for generations since, as peasants and laborers ceaselessly maintain the array of dikes and levees that contain the river’s power.

The Tears of Lady Meng

After unifying China, the First Emperor Qin set out to construct a Great Wall that would defend the empire against northern invaders. A young bride, Meng Jiang, was hardly married when the authorities suddenly took her husband to join hundreds of thousands of other men who, like him, had been summarily drafted to complete the ambitious project.

Work on the Wall was extremely harsh, and tens of thousands died in the punishing weather or from overwork. To bring padded clothing to her husband, Meng Jiang made the arduous journey to the site on foot. But she arrived only to find that he too had become a statistic.

Meng Jiang wept bitterly at her fate for three days, miraculously causing an immense section of the Great Wall to collapse. According to legend, seeing the piles of human bones that had been buried under the wall, she prayed to the gods to help her find her husband’s remains.

By biting her finger until it bled, Meng Jiang dripped blood on the skeletons in faith that it would sink into the bones of her beloved while running off the others. The divinities being with her, she at last succeeded in finding the remains of her husband and gave them a proper burial.

To honor this faithful woman, later generations erected a temple to her on a mountain near Shanhaiguan, where the Great Wall meets the Pacific Ocean, and remember her by the name of Lady Meng Jiang.

Twenty-five hundred years ago, at the beginning of the Warring States Period, there was a minister and general called Wu Zixu (roughly pronounced “woo zz-shoe”), who went to extraordinary lengths to avenge the unjust executions of his father and brother.

Wu’s story started when his father, tutor to the crown prince of their native Chu State, was imprisoned by the king, who was tricked by conspirators into believing that the elder Wu was plotting rebellion. Behind bars, the royal tutor was forced to write a letter ordering his sons to join him in the capital, with the intent of eliminating them in one stroke.

When Wu Zixu and his brother, Wu Shang, saw the letter, they knew it was a death trap, but they dared not disobey their father. On the other hand, to willingly let the family be extinguished at the hands of criminals would be even more unfilial.

Eventually the brothers found a solution. Wu Shang left for the Chu capital, sacrificing his life and fulfilling their duty to honor their father’s command. Wu Zixu, meanwhile, lived on, but his path was perhaps the more arduous.

Vowing to bring down the corrupt government of Chu, Wu Zixu first headed off alone to cross the mighty Yangtze River and escape to the eastern state of Wu. There, he managed to not only become an official but also help overthrow a usurper, build what became the modern city of Suzhou, and enlist the legendary author of the Art of War, Sun Zi, in his mission to conquer Chu.

After many years of preparations, Wu Zixu indeed led an army to the capital of Chu and vanquished those who had murdered his kin for power.

The mysterious genius Zhuge Liang (pronounced “joo-geh lyang”) was a key officer in the ranks of Liu Bei, who was fighting to restore the Han Dynasty (206 B.C.—220 AD). One famous story depicted in the 14th-century novel Romance of the Three Kingdoms describes how Liu and his comrades succeeded in hiring this expert strategist.

When Liu Bei and his sworn brothers, the generals Guan Yu and Zhang Fei, learned of Zhuge Liang’s ability, they traveled to his residence at Longzhong to speak with him. But even after two attempts, including one trip made in heavy snowfall, Zhuge was nowhere to be found.

By the third trip, Liu’s generals had grown weary of the strategist they had never met. Guan Yu guessed that Zhuge did not think himself fit for the job and was avoiding their respectful visits. Zhang Fei offered to capture Zhuge if he was present the third time but refused to work for Liu Bei.

Zhuge was indeed home when the sworn brothers went to see him, but he was taking a nap. Liu Bei drove an impatient Zhang Fei out of the courtyard when he suggested that they set fire to Zhuge’s home to scare him out of bed, and waited for the man to rise.

Two hours later, Zhuge Liang woke up and received Liu Bei in his house. He was impressed with Liu’s mission to restore the Han Dynasty and agreed to aid him in his campaigns.

Though well-respected today and throughout history as the man who perhaps had the most influence on traditional Chinese society, the sage Confucius never saw his teachings implemented in the many states that constituted China in his day.

Confucianism was one of the many schools of thought developing in China at the time. Some advocated stricter laws. Others saw universal love and equality, reinforced by pacifism and strong fortifications, as the hope for peace. But according to Confucius, what China really needed was for people, from prince to peasant, to respect their families and cultivate virtue in their lives.

During Confucius’s time, most men in power were primarily concerned with survival and conquest, and few were genuinely interested in what the teacher and his disciples, who came from a variety of social strata and official rank, had to offer.

But this was not important. For Confucius, to follow what the ancients called the Mandate of Heaven was a way of life, the way of the superior man. Confucianism was never adopted in his lifetime, and was suppressed by the First Emperor, but in the end the sage’s teachings became an enduring foundation of the Chinese people and culture.