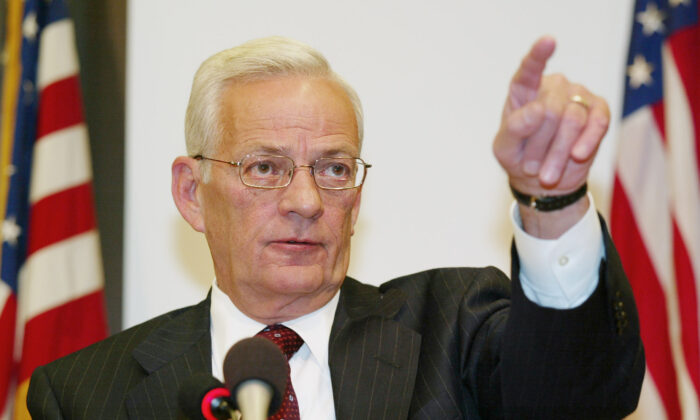 U.S. Secretary of the Treasury Paul O'Neill points to a reporter during a post G7 news conference at the World Bank Building in Washington on Sept. 28, 2002. (Hyungwon Kang/Reuters)
By Reuters

Paul O’Neill, the blunt-spoken former head of Alcoa Corp who was fired after two rocky years as U.S. President George W. Bush’s Treasury secretary, died on Saturday at the age of 84 at his home in Pittsburgh.

His family said he had been treated for lung cancer and his death was unrelated to COVID-19, the WSJ reported.

O’Neill served as the Republican Bush’s first Treasury secretary, from January 2001 to December 2002, during a period of in-fighting within the administration and tough economic times worsened by the Sept. 11, 2001, attacks on the United States.

The multimillionaire former corporate chieftain—he led aluminum company Alcoa from 1987 to 2000—was not a big fan of Bush’s first round of tax cuts. He then argued in vain with others in the administration, including Vice President Dick Cheney, against more cuts that he felt could fuel budget deficits and hurt the economy.

He also earned a reputation as a loose cannon as Treasury secretary with comments that at various times infuriated members of Bush’s inner circle, fellow Republicans in Congress, Wall Street, Latin American governments, and others.

It was Cheney, his friend dating to the 1970s in President Gerald Ford’s administration and had recruited O’Neill into the Treasury job, who told him that he was fired. O’Neill said Cheney had asked him to say his departure was his own decision, but O’Neill refused.

“I’m too old to begin telling lies now,” he said.

History bore out his concerns over the Bush tax cuts, which along with the costs of Bush’s wars in Iraq and Afghanistan contributed to soaring U.S. budget deficits in subsequent years.

Regarding Iraq, O’Neill said Bush’s team had decided on a course of the war which it then tried to justify by touting the threat posed by Iraqi leader Saddam Hussein’s weapons of mass destruction. After the invasion, no such weapons were found.

“From the start, we were building the case against Hussein and looking at how we could take him out and change Iraq into a new country,” O’Neill said in the 2004 book “The Price of Loyalty” by journalist Ron Suskind. “And, if we did that, it would solve everything. It was about finding a way to do it.”

Asked in 2008 whether he felt bitter about his time in the Bush administration, O’Neill told The New York Times: “No. I’m thankful I got fired when I did so that I didn’t have to be associated with what they subsequently did.”

During his stint as Treasury secretary O’Neill outraged congressional Republicans by calling one of their tax cut measures “show business.” He annoyed others in the administration by telling lawmakers that Bush’s signature tax cut drive was not likely to boost the economy in the short term.

He dismissed stock, bond, and currency traders as “people who sit in front of flickering green screens” whose jobs he could master in “a couple of weeks.” Brazil’s government protested after O’Neill worried publicly that money lent to Latin American countries would vanish into Swiss bank accounts.

He also irked Wall Street with overly optimistic assessments of the economy including an errant forecast after the 2001 attacks that the stock market would swiftly bounce back. His comment that the administration was not interested in pursuing a strong-dollar policy rattled global currency markets.

O’Neill was born on Dec. 4, 1935, in St. Louis to a family of modest means. After college, he began his career in government in 1961, working for the Veterans Administration. He was named as the No. 2 official in the White House budget office in 1974 and became friends with fellow Ford administration officials Cheney and Alan Greenspan, the future Fed chairman.

Greenspan served on Alcoa’s board when the aluminum company was searching for a new leader, and recruited O’Neill.

O’Neill served as both chairman and CEO of Alcoa from 1987 to 1999—increasing its profit, stock price, and market share—and retired as chairman in 2000. His Alcoa stock and options exceeded $100 million by the time he left.

O’Neill and his wife, Nancy, had four children.