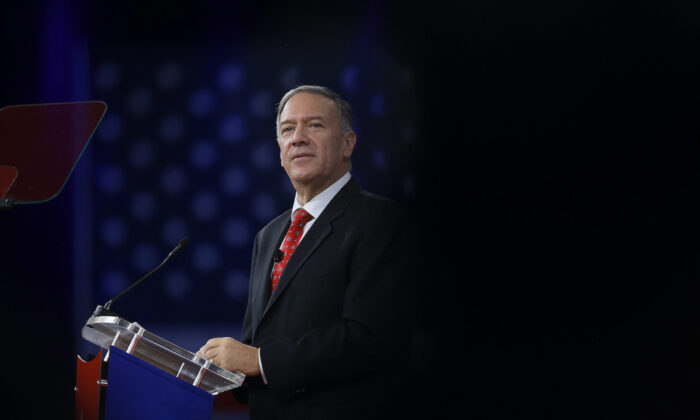 Former U.S. Secretary of State Mike Pompeo now has an online series where he is aiming to speak directly to the people of China about the Chinese Communist Party (CCP) and U.S.-China relations.

The series, “Evening Chats with Mike Pompeo: A Message to the Chinese People,” by the Hudson Institute’s China Center went online with episode one on Sept. 14.

This first episode is titled “The Chinese Communist Party Does Not Represent the Chinese People” and has Pompeo explaining how the CCP is a totalitarian, regime that only serves its own interests.

“The worst lie the CCP tells is that it speaks on behalf of China and of Chinese civilization. And I think the CCP knows it’s a lie,” he says in the video below.

Regarding U.S.-China relations, Pompeo explains why the CCP is hostile toward the United States.

“The CCP hates the United States because they are paranoid that the Chinese people will be inspired by the example of American freedom, the world’s oldest and most influential democracy,” he says.

In the video, Pompeo also sums up what the CCP is.

“[It] is a one-party, totalitarian political organization committed to a foreign, anti-Chinese ideology. It started out as a group of brutal, radical extremists. And frankly, not much has changed.”

What Pompeo says in the video is nothing new for him, he has long been outspoken about the CCP including when he served in the Trump administration. During an event held by Hong Kong Freedom Beacon last October, Pompeo said the CCP’s Marxist ideologies are contrary to Chinese traditions while referring to the regime as “the greatest threat” to the 1.4 billion people living on the mainland.

In the Hudson Institute video, Pompeo also further addresses the Chinese people’s relationship with the regime.

“There is no bigger enemy for the CCP than you, the Chinese people. I know this is true because all my interactions with the CCP leaders convinced me that what the CCP truly cares about is maintaining their stranglehold over the Chinese people,” he says.

Zen is a cardinal of the Catholic Church from Hong Kong who has been outspoken on issues of human rights, political freedom, and religious liberty in China.

Jimmy Lai is a Hong Kong entrepreneur and pro-democracy activist who founded several clothing brands and media companies, including Apple Daily, a well-known Chinese-language newspaper in Hong Kong and Taiwan.

“There are a lot of heroes, in small ways and big, throughout China. They’re the people who go to secret houses for worship, who commemorate Tiananmen Square, and who every day refuse to believe the CCP’s lies,” Pompeo says.

“The so-called People’s Republic seems to have a problem with its own people,” he says as the video finishes.

The former U.S. secretary of state and his team will develop this new series over the next few months.

The U.S. State Department ended its history of naive engagement with the CCP when Pompeo served as the 70th U.S. secretary of state.

Pompeo now serves as a distinguished fellow at the Hudson Institute, focusing on promoting U.S. national security, technological leadership, and global engagement. He is also the chairman of the advisory board for Hudson Institute’s China Center.

The China Center is now under the leadership of Miles Yu, who previously served as the senior Chinese policy and planning advisor at the U.S. State Department.

“The challenge that CCP poses to the world is not only a technological challenge, it’s not just an economic challenge, not merely a military challenge,” Yu said during a recent interview with NTD, the sister media outlet of The Epoch Times.

“But more importantly, it’s a moral challenge. Because the moral nature of the communist rule is antithetical to all the major moral foundations of modern society,” he said.