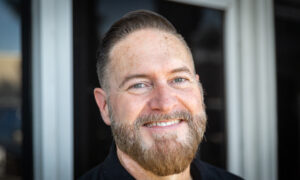 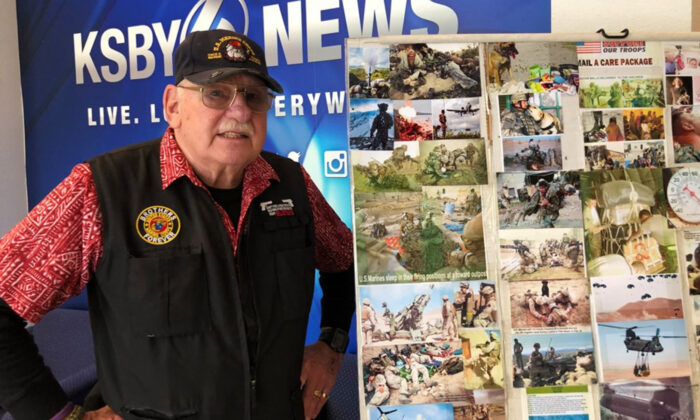 Over the past 15 years, the 86-year-old resident of San Luis Obispo, California, has sent more than 22,000 care packages to soldiers in Afghanistan, Iraq, Syria, Korea, Turkey, Germany, and elsewhere.

“You name it—wherever our troops are deployed—if I get emails from them, I go ahead and send boxes,” Tenenberg told The Epoch Times. “I believe it’s one of the legacies I will leave behind when I finally pass on and join my people.”

In response to The Epoch Times’ call-out for readers to highlight everyday acts of kindness in their communities, Natalie and Paul Burton nominated Tenenberg. The Burtons have assisted the veteran with his “Helping Soldiers in the Desert” program for the past eight years, and have witnessed his dedication firsthand.

“All he cares about is this program,” Natalie Burton told The Epoch Times. “Si mentally works 24/7 in order to not forsake our soldiers that are protecting our country. He is a hero and needs to be recognized.”

‘We Didn’t Have Care Packages Then’

The inception of the care package program occurred shortly after Tenenberg met someone who sent paperback books to troops in Afghanistan. He liked the idea—and decided to start sending out book packages of his own.

“I got a letter back [from the troops] … thanking me for the paperbacks, but also saying that they were cold and hungry because they were up in the Hindu Kush mountains of Afghanistan,” Tenenberg said. “They were not prepared for the harsh weather that they had up there: It was approximately 20 [degrees] below zero.”

Tenenberg quickly assembled a team of 20 volunteers, and funded the first outreach efforts with $5,000 of his own money.

Tenenberg’s empathy for his fellow servicemen and servicewomen runs deep. From 1952 to 1953, he served a tour in the Korean War, where he said he experienced the same desperation that he wants to assuage for soldiers today.

One particular incident remains chiseled in his memory. After he was deployed, his mother sent him an Italian salami that took six weeks to arrive via ship. When he finally received the box, a half dozen or so fellow soldiers surrounded him, eager to see what was inside.

When Tenenberg opened the box, he found a vaguely salami-shaped object covered in green fungus.

“We didn’t know what it was,” Tenenberg recalled. “In that same instant, somebody handed me a bayonet and said, ‘Let’s scrape that fungus off,’ which we did—right then and there.”

The green-coated salami was sliced into about 12 pieces, serving up a rare delicacy for the small group of hungry soldiers.

“Everybody that was over my shoulder got a hunk of Italian salami that even had some green moss still on it, [but] they didn’t care,” Tenenberg said with a chuckle. “We didn’t have care packages then.”

Now, Tenenberg marvels at the fact that his care packages can reach soldiers in the most remote areas in as few as seven days.

“In many of these places—especially in the combat areas—[they] strictly drink bottled water, and it tastes pretty bad because it comes from Saudi Arabia,” Tenenberg said. “So they put the Crystal Light and things like that in, so it actually has some taste to it.”

Based on the season’s requirements, he may also include cooling towels, sunscreen, hand and foot warmers, gloves, and scarves. Depending on the specific needs that soldiers express to him in their emails, he might toss in a new pair of boots or a fresh set of sheets.

Natalie Burton said that Tenenberg often reads her the thank you notes sent to him by the grateful soldiers.

“When you get the emails back with the ‘thank yous’ for helping them out, [he] will read them out loud, and we’ll be all crying together. It’s just heartbreaking,” she said.

A group of U.S. Army Special Forces, also known as Green Berets, stationed in Afghanistan recently sent an email to Tenenberg describing the challenges of living on a base they said was being “quickly reconsolidated.”

“[We] are the last US fighting unit on the ground here. With everything drawing down, the running joke is we are green berets manning the Alamo of Afghanistan,” read the Jan. 28 email. “We had a chow hall once, but it’s on the way out as the contractors are being pulled out. Oh, well, that’s the nature of war.”

The group describes limited cooking facilities; no post exchange for purchasing food, clothing, or supplies; and no soap for the single washer-and-dryer unit shared by the 14 men in the group.

“That gives you an idea of guys that are over there in great need. They have nothing, [and] I would say 50 percent of the Special Forces live in the kind of conditions that this one Green Beret group is living in,” Tenenberg said.

Dozens of other messages provided to The Epoch Times requested everything from basic hygiene products to games and toys. One email—sent March 30 from an undisclosed mountaintop location—requested socks, gloves, and toiletries, lamenting that the nearest post exchange is a four-hour helicopter ride away.

“Items that can divert our minds are always good too,” wrote a soldier stationed in Germany. “In the past we have built LEGOs and display them in our office. Breaks up the plain walls and chairs.”

Before the pandemic, Tenenberg said his group sent out up to 60 packages each week. But now, his own health concerns have prompted him to cut the number of volunteers in half, and in an average week, they mail about 20 boxes.

Tenenberg also said the number of emails he receives has tapered slightly, because so many troops have been forced into isolation by the COVID-19 pandemic.

Natalie Burton said “it really takes dedication” for Tenenberg—“a warm teddy bear, but a Marine at heart”—to continue in the face of adversity. “He has figured a way that we can still send our troops care packages with more effort on all our parts.”

With crucial help from the Burtons, Helping Soldiers in the Desert continues to send out what it can—even though shipping costs have nearly tripled.

“It makes me feel great to keep on doing it,” Tenenberg said. “I’ve been sent certificates of appreciation from just about every group you can think of. I’ve had flags flown over the base in my honor, and then they send me the flag. It gives me an awful lot of good feelings as a result.”