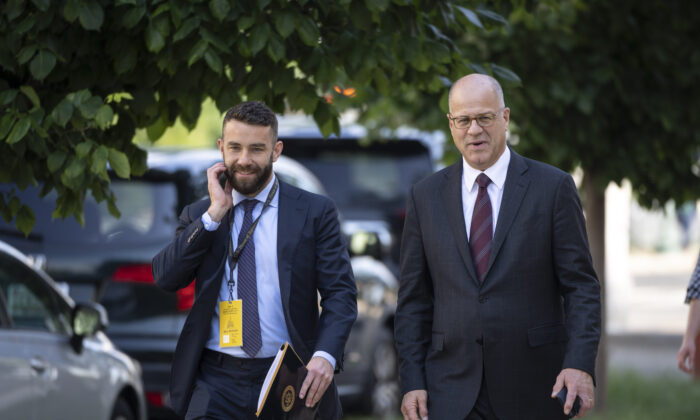 The former manager of Donald Trump’s 2020 campaign abruptly withdrew from appearing before a House of Representatives committee investigating the Jan. 6, 2021, breach of the U.S. Capitol.

William Stepien, who managed the campaign, was subpoenaed by the panel and was in Washington prepared to appear, Rep. Bennie Thompson (D-Miss.), the panel’s chairman, said as the hearing started on June 13.

“Mr. Stepien’s attorney is here with us today and he has advised us that Mr. Stepien’s wife went into labor this morning,” Thompson said. “Mr. Stepien unexpectedly had to travel to be with his wife and we wish him the best.”

“It’s proper for him to be with his wife as they welcome his child,” Rep. Zoe Lofgren (D-Calif.) said later.

The panel had said that Stepien experienced a “family emergency” and that his lawyer, Kevin Marino, would “appear and make a statement on the record.”

In lieu of in-person testimony, the panel showed clips of Stepien’s deposition, which was recorded earlier this year.

The panel was conducting a hearing that it said would give Americans a summary of its findings, following its first hearing in months on June 9.

The initial moments of the hearing saw the panel play footage of depositions of Stepien, Trump’s daughter Ivanka Trump, and others who were at the White House on election night in 2020.

On Trump’s press conference on early Nov. 5, 2020—in which Trump said he won the election as votes continued being counted—Stepien was seen saying that he had advised Trump to give a different type of statement.

“My advice was to say that votes were still being counted, it’s too early to tell, too early to call the race, but we’re proud of the race we ran and we think we’re in a good position, and we’ll have more to say about this on the next day, or the next day—whenever we had something to say,” Stepien said in his deposition.

Stepien also said he told Trump that the vote-counting would be a process and that early returns would be positive but that ones counted later might not be.

The only other witness slated to testify in-person during the first portion of the hearing on Monday was Chris Stirewalt, a former political editor at Fox News who is now employed by NewsNation.

Stirewalt defended the network’s early call of Arizona for Joe Biden, which was made on election night.

“It was really controversial to our competitors that we beat so badly by making the correct call first,” Stirewalt said.

The margin in Arizona was under 11,000 votes, out of over 3.2 million cast, and votes were counted for days after Fox called the race. According to one analysis, thousands of votes were wrongly counted.

The panel’s next hearing is scheduled for June 15.