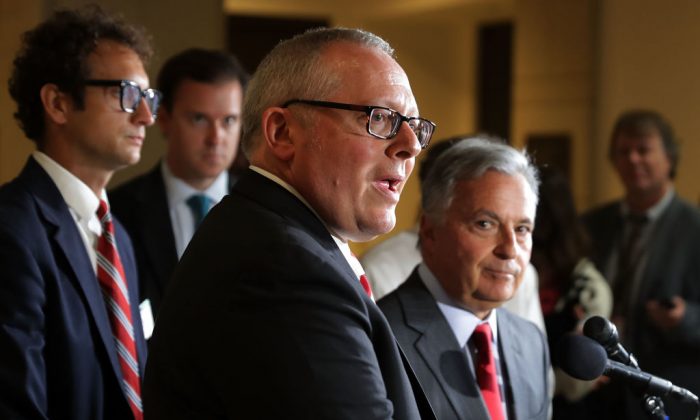 A former Trump campaign aide told the Senate Intelligence Committee on Tuesday that the panel’s Russia investigation was crushing his family financially due to legal fees and had forced them out of their home.

“Today, I can’t possibly pay the attendant legal costs and live near my aging father, raising my kids where I grew up,” Michael Caputo said in his closing statement which was obtained by Washington Examiner. “Your investigation and others into the allegations of Trump campaign collusion with Russia are costing my family a great deal of money—more than $125,000—and making a visceral impact on my children.”

“God damn you to hell,” Caputo told them.

Caputo accused the panel of being part of the swamp, a term President Donald Trump uses to describe the corruption and bureaucracy in Washington.

As an example, Caputo pointed out that Daniel Jones, a former staffer for Sen. Diane Feinstein, a current member of the committee, was the source for a McClatchy article about Trump’s personal lawyer, Michael Cohen.

The article says that Cohen “secretly made a late-summer trip to Prague during the 2016 presidential campaign,” citing two unnamed sources.

Cohen has denied the allegations in the report.

“But who is McClatchy’s second source?” Caputo said. “It couldn’t be Dan; he was the first source … So who could it be—perhaps one of his former Senate Intelligence colleagues? I mean, you’re all in this together. You’re the swamp.”

Caputo said that the investigators should themselves be investigated, demanding they explain who was coordinating the “attack” on the president.

“Forget about all the death threats against my family. I want to know who cost us so much money, who crushed our kids, who forced us out of our home, all because you lost an election,” Caputo said. “I want to know because God damn you to hell.”

The committee asked Caputo about some 20 people connected to the Trump campaign and whether he knew about any communications they’ve had with Russian officials.

“My answer for each of them was the same,” Caputo said. “There was none.”

Caputo also met with Special Counsel Mueller’s team on Wednesday. After the interview, he told ABC that Mueller is still focused on investigating collusion claims.

“The investigators at the special counsel’s office are following leads all the way to the end,” Caputo said. “But they have a very clear direction in their question. It’s all about collusion.”