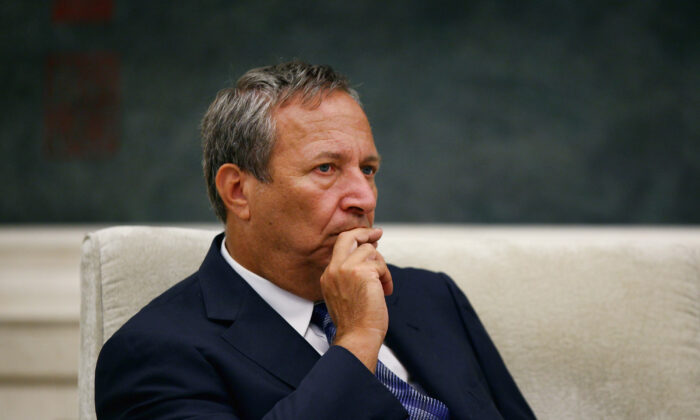 The Federal Reserve needs to alert investors that in order to contain inflation, the central bank will have to impose a restrictive monetary policy that will drive up the U.S. unemployment rate, former Treasury Secretary Lawrence Summers said in a recent interview for Bloomberg Television.

Summers, who was also a director of the White House National Economic Council under President Barack Obama, said the leadership at the Fed is causing confusion among investors by avoiding a clear declaration on its future policy rate stance.

“My worst fear would be that the Fed will continue to be suggesting that it can have it all in terms of low inflation, low unemployment, and a healthy economy,” he said.

Summers is a frequent critic of Fed Chairman Jerome Powell and the Fed’s handling of inflation. Powell will be speaking at the annual central banking conference in Jackson Hole, Wyoming, on Aug. 26 to share the Fed’s view on the state of the U.S. economy as Wall Street seeks clarity about interest rates.

Traders are currently pricing in a 54.5 percent chance of a 75-basis-point hike at the Fed’s next meeting in September, as its policymakers aim to lower inflation while still avoiding a major economic slowdown.

Summers said any move that implies that inflation can be controlled without causing a lot of pain would leave Americans “very much in doubt about what lies ahead.”

He asserted that Powell needs to be more honest about the fact that a tightened economic policy will most likely result in job losses, and that the Fed will have to clarify its message or “further damage” will be done to its credibility.

Summers said the Fed doesn’t want to acknowledge that it would be unrealistic to get inflation down without unemployment going up, which he said “forces a certain confusion into all of their statements.” He has consistently criticized the Fed for projecting that unemployment will rise to only 4.1 percent by 2024 and has stated that it will most likely need to be above 5 percent to successfully tackle inflation.

The national unemployment rate was just 3.5 percent in July, according to the latest jobs report.

Summers said the Fed’s policy rate, which is currently at 2.25 percent to 2.5 percent, is too close to the “neutral rate,” where it has little effect on inflation.

“My hope is that we will get clarity that policy is not yet restrictive, that it needs to be restrictive if we’re going to contain inflation, and that we’ll need to accept the consequences of that,” he said.

He pointed out that the rebound in U.S. markets since mid-June shows that investors don’t see the Fed’s rate hikes as restrictive, which runs counter to the central bank’s inflation campaign.

“When, in the middle of a tightening cycle, financial conditions are substantially loosening, that has to make a central bank nervous,” Summers said.

He also said that the latest data from the Consumer Price Index showing the headline inflation rate falling to 8.5 percent in July gives him little optimism.

Some people have praised the news of flat inflation growth between June and July, despite the fact that core prices, which exclude food and energy costs, rose 0.3 percent.

Summers pointed to continued strong gains in wages and in so-called trimmed-mean inflation measures, which strip out the most volatile elements each month.

He said he didn’t see any significant progress with regard to taming inflation, and that “we’ve still got a substantial inflation challenge ahead of us.”