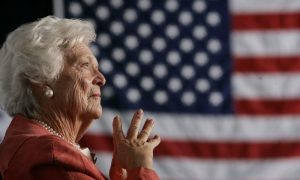 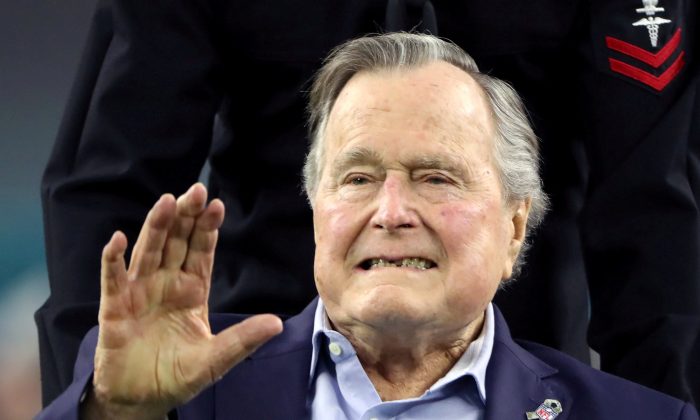 Former U.S. President George H.W. Bush arrives on the field to do the coin toss ahead of the start of Super Bowl LI between the New England Patriots and the Atlanta Falcons in Houston, Texas, U.S. on Feb. 5, 2017. (Reuters/Adrees Latif/File Photo)
US News

AUSTIN, Texas–Former U.S. President George H.W. Bush was admitted to a Houston hospital on Sunday after contracting an infection that spread to his blood, a family spokesman said on Monday.

Bush, 93, was admitted to Houston Methodist Hospital a day after a funeral was held for his wife, Barbara Bush, spokesman Jim McGrath said.

“He is responding to treatments and appears to be recovering,” McGrath said in a statement.

Bush, the country’s oldest living ex-president, served a single term in the Oval Office from 1989 through 1993.

He is the father of former Republican President George W. Bush, who served two terms from 2001 through 2009, and former Florida Governor Jeb Bush, who unsuccessfully sought the 2016 Republican nomination for president.

Former U.S. first lady Barbara Bush, the only American woman to see her husband and son both sworn in as president, died last Tuesday at the age of 92.

Barbara Bush’s longtime friend, Susan Baker, the wife of former Secretary of State James Baker, described her in a eulogy at her funeral on Saturday as a “tough but loving enforcer” whose 73-year marriage to her husband was a real-life fairy tale.