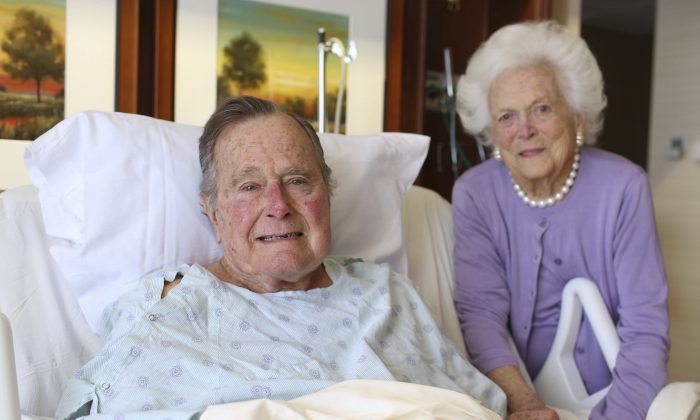 HOUSTON—Former U.S. President George H.W. Bush has been readmitted to a Houston hospital for treatment of a mild case of pneumonia, his second bout of that respiratory illness in three months, but “is going to be fine,” his spokesman said on Tuesday.

Family spokesman Jim McGrath said the 92-year-old former president was hospitalized on Friday “for observation due to a persistent cough that prevented him from getting proper rest.”

“It was subsequently determined he had a mild case of pneumonia, which was treated and has been resolved,” McGrath said in a statement. “President Bush is in very good spirits and is being held for further observation while he regains his strength.”

McGrath furnished no immediate additional information except to say that Bush was at Houston Methodist Hospital, where he had spent more than two weeks in January after developing pneumonia.

Bush spent much of that time in the hospital’s intensive care unit. His wife, former first lady Barbara Bush, 91, had an overlapping stay at the same hospital for treatment of bronchitis.

The couple marked their 72nd wedding anniversary on Jan. 6.

Bush, the nation’s oldest living ex-president, served a single term in the Oval Office as America’s 41st commander-in-chief from 1989 through 1992.

He is the father of former President George W. Bush, who served two terms in the White House from 2001 through 2008, and former Florida Governor Jeb Bush, who unsuccessfully sought the 2016 Republican nomination for president.

The elder Bush, a Republican like his sons, also served as vice president for eight years during Ronald Reagan’s two terms as president before being elected to the White House himself, defeating former Massachusetts Governor Michael Dukakis, the Democratic nominee, in 1988.

He lost his 1992 re-election bid to Democrat Bill Clinton.