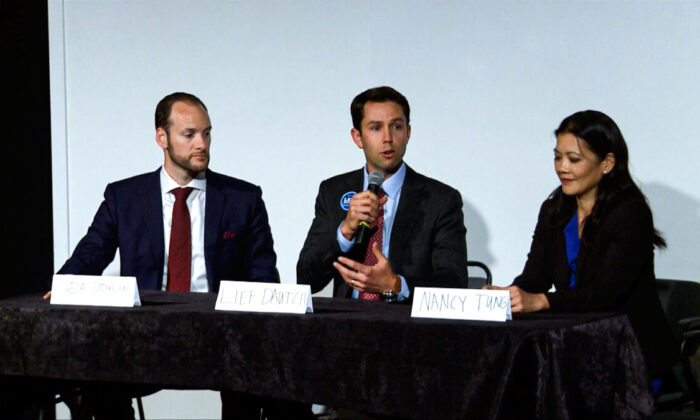 A former police officer from the San Francisco Police Department said that District Attorney Chesa Boudin’s leadership has led to an increase in property crime and theft throughout the city.

Boudin is currently the subject of a special recall election scheduled for next year.

Lou Barberini, a retired police officer, explained that Boudin assumed the role of district attorney through San Francisco’s rank choice voting system. Under this system, voters rank the candidates based on their first, second, and third choice, and so on.

Of the candidates running in 2019, Boudin won 35.7 percent of the votes in the first round. Candidates were then eliminated, and votes were transferred to remaining candidates. After the third and final round, Boudin amassed 50.8 percent of all votes and assumed office in January 2020.

“There’s a perception that he’s not the choice of the majority. That’s part of it, so he doesn’t have a mandate. But I think that the citizens have witnessed that a lot of criminals are getting out [of prison] right away. They’re getting arrested with GPS ankle monitors; there’s no consequences to them being arrested, and crime is up,” Barberini told The Epoch Times.

Earlier this year, multiple viral Twitter videos showed groups of people rushing into stores, stealing items, and walking or running out without arrest.

“You have certain legacy newspapers defending and coming up with statistics at only six shoplifting crimes [occurring] in San Francisco per day,” he said. “Then, meanwhile, 17 Walgreens have closed, Target has cut its hours, Safeway on Church and Market have cut their hours. So it doesn’t jive with what we see.”

He said that the statistics being reported do not match the reality of the daily situation taking place on the streets of San Francisco.

“I’ve interviewed a security guard at the 4th and Market Walgreens, and he said on the day the article came out, the first article that only six [shoplifting] crimes occur in San Francisco … he caught over 20 people,” Barberini said.

Two months after Boudin assumed the role of district attorney, San Francisco had to adapt to new situations resulting from pandemic-related lockdowns.

“The city changed completely. Bridge traffic dropped; hotels were down and maybe 40 percent of what they were. So you have two tiers. You had the first two and a half months of Boudin under a normal economy, and then you had a COVID economy,” said Barberini.

He believes that during the first few months of Boudin’s leadership, crime was down due to the lack of tourism and due to people working from home, rather than Boudin’s policies.

“We’ve been through two years of COVID, and crime is up. If you measure crime from the March 17 shutdown in 2020 to now, larceny is up 40 percent; violent crime is up slightly; burglaries in 2021 through September 30 are already greater than the entire year of 2019,” Barberini said.

“Liberals, progressives, Democrats, Republican, non-party. It doesn’t matter. Across the board, everyone was signing the petition,” said Richie Greenberg, organizer of the Recall Chesa Boudin Effort.

Greenberg told The Epoch Times that while Boudin has a few supporters, he is not popular among San Francisco residents.

He said that Boudin has been frequently criticized for the city’s crime rates due to his lack of prosecutions. However, Greenberg believes the tipping point was the Dec. 31, 2020 incident, in which a paroled felon named Troy McAlister struck and killed two pedestrians, Hanako Abe and Elizabeth Platt.

McAlister was drunk and driving a stolen car. After the incident, Boudin did not file charges against McAlister.

“What is really important to understand is that in this overall effort to remove Chesa Boudin out of office, it’s not one committee succeeding or the other one, it’s not the first recall signature gathering effort or the second one. It’s both,” said Greenberg. “Everyone is working together for the common goal.”

Recall organizers have said they will continue focusing their efforts on raising awareness and support in the months leading up to the special election.

The Safer SF Without Boudin Campaign said in a statement to the San Francisco Chronicle: “Now that the recall is on the ballot, we are laser-focused on getting our message out via doors, phones and airwaves to help ensure San Francisco has a D.A. that makes public safety their No. 1 priority.”

Julie Edwards, spokesperson of Friends of Chesa Boudin Opposing the Recall, told The Epoch Times: “After spending $1.4 million, and using shady and misleading tactics, it’s no surprise that this radical recall has bought its way onto the ballot. We saw the exact same thing happen with Governor Newsom’s recall. We are confident San Francisco voters will reject this Republican-funded and endorsed effort as well. The recall is an attempt to reverse the reforms DA Boudin has enacted to keep us safe and make the criminal justice system fairer. But this will not stop him from continuing to work for all San Franciscans.”

The special election to determine whether Boudin will be recalled is set for June 7, 2022.