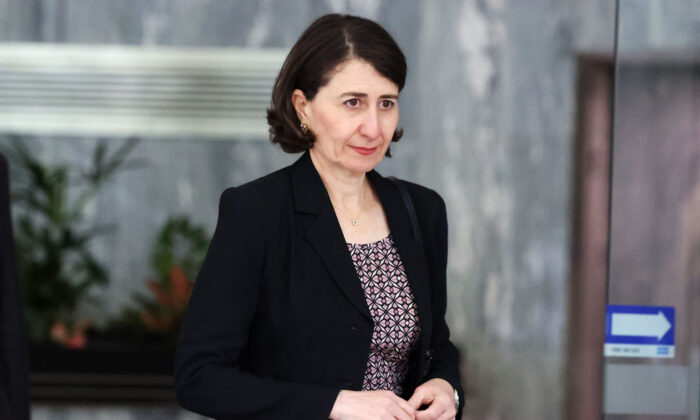 Former NSW Premier Gladys Berejiklian walks to speak to the media as she departs the Independent Commission Against Corruption on November 01, 2021 in Sydney, Australia. (Mark Kolbe/Getty Images)
Australia

Disgraced former MP Daryl Maguire allegedly told then-NSW Premier Gladys Berejiklian to get a private phone and download the instant messaging app WeChat days after he had been summoned by Australia’s corruption watchdog in 2018, the Independent Commission Against Corruption (ICAC) heard on Monday.

The allegations come as the former NSW Premier Gladys Berejiklian appeared before the corruption inquiry for the second time.

Maguire texted Berejiklian on July 9, 2018, asking her to download WeChat, a messaging app popular among Chinese people, which has raised security concerns.

“They can read texts, but not the little green man. It leaves no trace,” Maguire allegedly wrote to Berejiklian five days after he was called by the commission.

When confronted with the text messages Berejiklian said she had no idea if “they” referred to ICAC, or if the “little green man” referred to WeChat, which had a green icon with two cartoonized portrait images, saying that she had never used the app and did not know anything about it.

The former premier said Maguire’s suggestions “could have been for privacy reasons.”

“I had no inclination to think that it was because he had done anything wrong,” Berejiklian said on Monday. “I had no reason to disbelieve him when I pressed him a number of times and he said he’d done nothing wrong.”

Maguire quit the Liberal Party on July 13, four days after he suggested they use WeChat to contact each other.  He then resigned his seat for Wagga Wagga, NSW on Aug. 3  after facing increasing pressure to do so.

Maguire has previously admitted after recordings of phone calls were released that he had tried to broker a deal with Chinese property developer Country Garden and sought financial returns.

The ICAC is investigating whether Berejiklian breached the public trust in her secret relationship with Maguire.

Berejiklian has always denied wrongdoing or conflicts of interest.

“I did not assume any wrongdoing,” she said on Monday. “I am a stickler for making sure everything is done by the book.”

The hearing was played a recording of a phone call monitored by investigators in July 2018 in which Maguire told his ex-girlfriend to “throw money at Wagga,” and the latter said she would.

When asked about the phone call, Berejiklian said governments “threw money at seats in order to keep them” in a by-election.

The former premier admitted that after Maguire was called in for questioning by the ICAC, her chief of staff advised her to cut ties with him, but she did not listen.