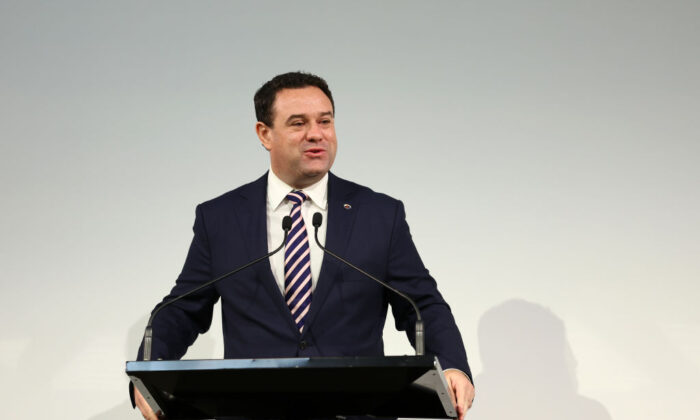 Stuart Ayres, former NSW Minister for Investment and Trade, speaks during the Welcome to Country ahead of Australian Fashion Week 2022 at Carriageworks in Sydney, Australia on May 9, 2022. (Mark Metcalfe/Getty Images)
Australia

Stuart Ayres, formerly the trade minister of New South Wales (NSW), was cleared of concerns that he breached the ministerial code of conduct.

An independent review by barrister Bruce McClintock was conducted after concerns were raised that Ayres had overstepped his role in the appointment of former NSW Deputy Premier to a high-paying U.S. trade role.

“I do not consider that Mr Ayres breached the ministerial code of conduct,” McClintock said in his report (pdf).

According to the findings, McClintock said it appeared that Ayres did not attempt to influence the outcome of the recruitment process, the process was not conducted at “arm’s length,” and there was no basis for a conflict of interest.

“It is true that Mr Ayres and Mr Barilaro, while from different parties, had been cabinet and parliamentary colleagues for some years, but there does not appear to have been any other relationship or connection between two men,” he said. “They were certainly not friends, nor had any form of personal relationship, so far as I can determine.”

McClintock accepted and used the findings of former NSW public services commissioner Graeme Head, who conducted an inquiry into Barilaro’s appointment and found it had not been completed at arm’s length from the government.

However, he disagreed with Head’s “reliance on the concept of ‘arm’s length,’” saying that it “did not establish any breach of the ministerial code of conduct.”

He added that the person responsible for Barilaro’s appointment, Amy Brown, was the CEO of Investment NSW at the time, a department under Ayres, meaning daily close contact was expected.

Head’s investigations and McClintock’s findings established that Ayres “did not give any direction relevantly” to Brown, and the code of conduct had not been broken.

Ayres welcomed the release of the report and said in a statement that he had “always acted honestly and with integrity in my service to the public of NSW.”

“The report is unequivocally clear that I acted in accordance with the ministerial code of conduct,” he said.

“It makes it clear that I acted lawfully, honestly, and had no conflict of interest.”

Premier Dominic Perrottet described the report as an “emphatic exoneration” of Ayres and has not ruled out the possibility of Ayres’s return to cabinet.

However, Penny Sharpe, Labor’s leader in the legislative council, disagreed on a return to cabinet as the review only scrutinised whether a breach of the ministerial code took place.

“He may not have technically breached the ministerial code of conduct, but he’s shown very poor judgment, and the premier has allowed him to do that all the way along,” she said.

Ayres repeatedly denied allegations of unlawful conduct, but had agreed to step down from all his ministerial positions in August to allow a thorough investigation into the matter.

“To maintain the integrity of the cabinet, I have decided to resign as a minister to allow the investigation to be completed. Accordingly, I will also be resigning as the deputy leader of the Liberal Party,” Ayres said in a statement on Aug. 3.

Prior to stepping down, Ayres acknowledged that he should have told Barilaro not to apply for the job.

“I should have told him that even though he’s a private citizen, and he can apply for the role … it was probably not in his best interest or the state’s best interests,” Ayres said.