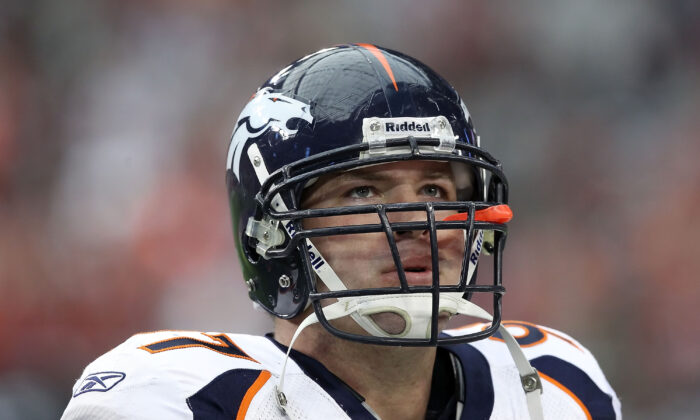 Defensive end Justin Bannan #97 of the Denver Broncos stands on the sideline during the NFL game against the Arizona Cardinals at the University of Phoenix Stadium, in Glendale, Ariz., on Dec. 12, 2010. (Christian Petersen/Getty Images)
Crime and Incidents

“We appreciate the jury’s hard work and service over the past two weeks,” the office said in an emailed statement to The Epoch Times. “Our team will have additional comments after the sentencing.”

Sentencing is scheduled to take place on Nov. 5.

The most serious charge Bannan was convicted of, first-degree attempted murder, has a maximum sentence of 48 years.

The district attorney’s office did not immediately respond to a request for comment.

Bannan, who used to play for the Denver Broncos, was arrested in 2019 over the shooting of Ashley Marie, who worked in the same building in Boulder.

Police officers said Bannan admitted to the shooting but described it as accidental. He said he believed the Russian Mafia was after him.

Bannan later pleaded not guilty, claiming he was not of the right mind.

Harvey Steinberg, an attorney representing the ex-football player, told the court in closing arguments that his client’s brain was damaged from his time playing the sport.

“In Roman times, people would come cheer the gladiators. And they were great,” Steinberg said. “And then when they were done with them, as you know historically, they fed them to the lions.”

Prosecutors pointed the focus back on the woman who was shot, with one telling the court the case was about “Ashley Marie, not the defendant’s brain.”