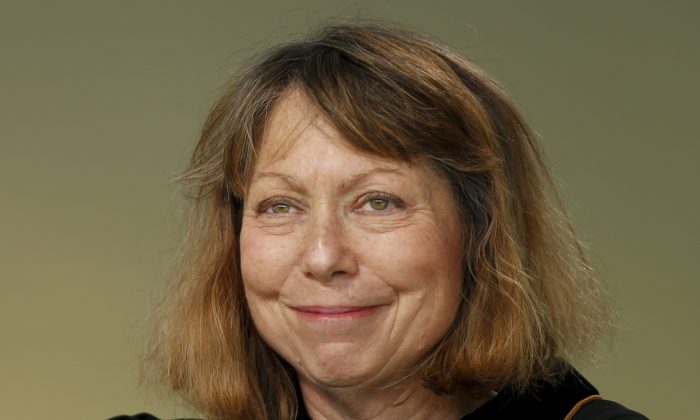 In a series of posts on Twitter, Moynihan highlighted passages he said were copied.

He said that he felt compelled to fact check the three chapters in the book about Vice because he found an “egregious error” about a colleague that Abramson admitted was wrong before correcting the mistake for the final publication.

“While trying to corroborate certain claims, I noticed that it also contained … plagiarized passages,” he wrote.

The following examples from the final book—not the galley—are only from the Vice chapters (I didn’t check the others). So let’s begin…Here is Abramson on Gavin McInnes (whom she interviewed) and the Ryerson Review of Journalism https://t.co/hx0XcyZ89k pic.twitter.com/qroN59gyVk

This paragraph can be sourced to two places: a *masters thesis* and a 2013 New Yorker piece by Lizzie Widdicombe https://t.co/ZWX5RgKxlahttps://t.co/Ux6gdDO9Qg pic.twitter.com/tSIKyRoKDP

Abramson appeared to lift and slightly edit passages from the Ryerson Review of Journalism, Time Out magazine, the New Yorker, a masters thesis, and Columbia Journalism Review.

“There’s plenty more–enormous factual errors, other cribbed passages, single or unsourced claims–but this should give a sense,” Moynihan wrote after providing six examples of alleged plagiarism.

Frisch also took to Twitter to say that Abramson appeared to plagiarize him at least seven times.

“This is just crazy. I’m just showing these screenshots so people know,” he wrote. “Shame on you, Jill. Shame on you.”

“There’s 70 pages of footnotes showing where I got the information,” she said.

Statement from Simon & Schuster on Jill Abramson’s book: “If upon further examination changes or attributions are deemed necessary we stand ready to work with the author in making those revisions.” pic.twitter.com/uHnERiyA43

Martha McCallum, who was interviewing Abramson, pressed her again, asking if perhaps Abramson forgot to insert footnotes into some areas of the book.

“No, I don’t think it’s an issue at all,” Abramson replied. “Many people from Vice have been taking issue with the book it seems…I think they don’t like the portrayal of Vice.”

A few hours later, she took to Twitter to issue an updated response that attacked Vice while saying she’d review the passages.

“The attacks on my book from some in @vicenews reflect their unhappiness with what I consider a balanced portrayal,” she wrote. “I endeavored to accurately and properly give attribution to the hundreds of sources that were part of my research. I take seriously the issues raised and will review the passages in question.”

“If upon further examination changes or attributions are deemed necessary we stand ready to work with the author in making those revisions,” the publisher added.