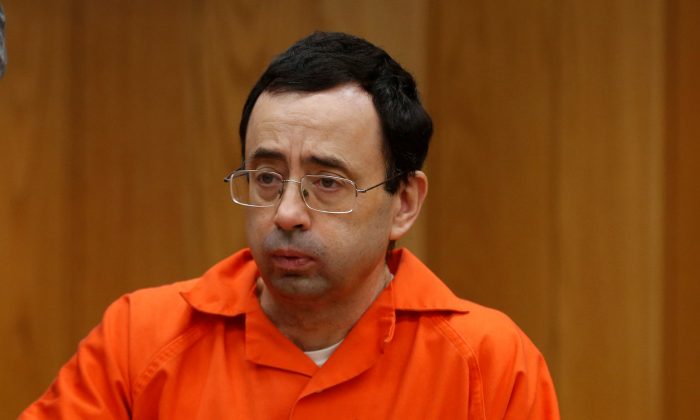 Larry Nassar, a former team USA Gymnastics doctor who pleaded guilty in November 2017 to sexual assault charges, sits in the courtroom during his sentencing hearing in the Eaton County Court in Charlotte, Michigan, U.S., February 2, 2018. (Reuters/Rebecca Cook)
Crime and Incidents

DETROIT—Charges will be announced on Tuesday against a former Michigan State University dean who supervised ex-USA Gymnastics physician LarryNassar before Nassar was convicted of sexually abusing female athletes, a county sheriff said.

William Strampel, 70, the former dean of Michigan State’s College of Osteopathic Medicine, was being held in the Ingham County jail and will be arraigned in court on Tuesday, when charges against him will be announced, Ingham County Sheriff Scott Wriggelsworth told Reuters.

Strampel faces multiple charges, at least one a felony, the Detroit Free Press newspaper reported. Wriggelsworth declined to say what charges Strampel faces. Strampel’s attorney could not be reached for comment on Monday after his arrest.

The special prosecutor investigating how Michigan State University handled complaints about Nassar, who has been sentenced to prison for sexually abusing female gymnasts, is also expect to give an update on his investigation on Tuesday.

William Forsyth, a retired Kent County prosecutor, will be joined by representatives from the Michigan State Police and the state Attorney General’s Office, when he speaks to reporters at noon ET on Tuesday in Lansing, Michigan.

Nassar received two prison sentences in Michigan of 40 to 125 years and 40 to 175 years for molesting female athletes under the guise of medical treatment.

The university has been criticized for its handling of the scandal. Athletes had been complaining about Nassar since the 1990s, but the university did not open an investigation until 2014.

The case of Nassar, 54, has rocked the university, where he was a faculty member and physician at an on-campus clinic. He also worked for USA Gymnastics as a doctor to Olympic athletes, leading to the resignation of the entire board of the sport’s governing body.

In January, Michigan State University President Lou Anna Simon stepped down under pressure and Athletic Director Mark Hollis announced his retirement. Both said they were unaware of Nassar‘s abuse until it was reported publicly.

In February, the school moved to fire Strampel, who it said failed to enforce 2014 guidelines created for Nassar in treating young athletes after complaints of sexual misconduct against him. Michigan State fired Nassar in September 2016.

Michigan State also faces investigations by the U.S. Department of Education, the National Collegiate Athletics Association, the U.S. Senate and the Michigan House of Representatives.