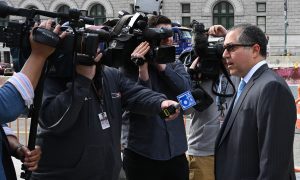 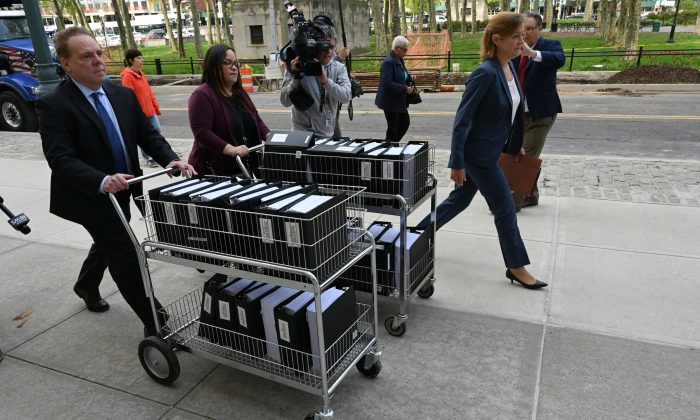 Members of the prosecution in the NXIVM case arrive with documents at Brooklyn Federal Court for day one of the trial of Keith Raniere, founder of NXIVM on May 7, 2019. (TIMOTHY A. CLARY/AFP/Getty Images)
US News

NEW YORK—A filmmaker and former board member of NXIVM recounted in a Brooklyn federal court the moment he started to question everything behind the organization he was a member of for 12 years. At one point in his testimony, he became emotional as he spoke about a conversation he had with a “slave” just days before he resigned.

Born in South Africa, Mark Vicente, who joined NXIVM in 2005, said the walls around him started “tumbling down” after he heard about DOS, a secret society within NXIVM that leader Keith Raniere founded in 2015. Raniere styled himself as the “grandmaster” of DOS, while its members were all his sexual “slaves.”

DOS, an acronym for the Latin phrase “dominus obsequious sororium,” which loosely translates as “master over the slave women,” employed a pyramid structure involving levels of “slaves” headed by “masters”; slaves were then expected to recruit their own slaves, thus becoming masters themselves. Raniere was the “highest master” of DOS and made other members—all women—have sex with him.

Jurors also witnessed for the first time nude photos that DOS members were forced to send to Raniere as collateral, including photos of their brands. The brand was a symbol incorporating Raniere’s initials and burned onto the skin with a cauterizing pen, during a process that took “20 to 30 minutes,” according to court documents.

Vicente, once a devoted member of NXIVM, a purported self-help group, said he was promoted “12 times” during his time in the organization. But as he heard more and more details surrounding Raniere—whom he referred to as “supreme leader” in one instance during his testimony—he started to question the group.

“My perspective on Keith Raniere changed. What if he is the exact opposite? … What if he was, in fact, evil?” Vicente testified under oath on May 15.

Vicente said that in April 2017, he approached Raniere about some of the things he had heard involving women. He said Raniere’s responses made him feel more “disturbed.”

“You are attached to morality. … There’s limitations to these things,” Raniere told him, Vicente recalled.

The former board member said he then started questioning why the leader was trying to make him “give up morality.” Vicente was also the co-founder of one of NXIVM’s subgroups, an all-male society dubbed the “Society of Protectors.”

“At that point, my instinct was screaming, ‘Something’s wrong,'” Vicente said.

Later, Vicente said he spoke to Sarah, another NXIVM member who was identified by her first name only, to tell her he was planning to resign. He said he told Sarah about the things he had heard, at which point she became very quiet.

Sarah told him about the existence of DOS and that she was a member of it. Vicente said it was the first time he had heard of the “master-slave” society. Sarah said she wanted to leave but was “trapped” and that the group had “too much on me.” She was referring to the “collateral” members had to submit, including naked photos of themselves and fake damning letters against their family members, to ensure that they kept the group’s activities secret.

Vicente learned from Sarah that she’d had to recruit more slaves and that she was a “master” herself. Sarah told him her own master was Lauren Salzman, the daughter of Nancy Salzman, who was the president of NXIVM. During his testimony, Vicente became tearful as he recalled urging Sarah to leave the group.

Sarah was too afraid of her collateral being released. Vicente pleaded with her to “make peace” with it and insisted it was better to leave DOS.

Vicente said he sent his letters of resignation via email sometime in May 2017. He avoided mentioning DOS in the emails and said he would be focusing on his filmmaking career. Vicente later asked a DOS member to give him collateral documents so he could turn them over to authorities. He came in contact with the FBI at the end of May 2017.