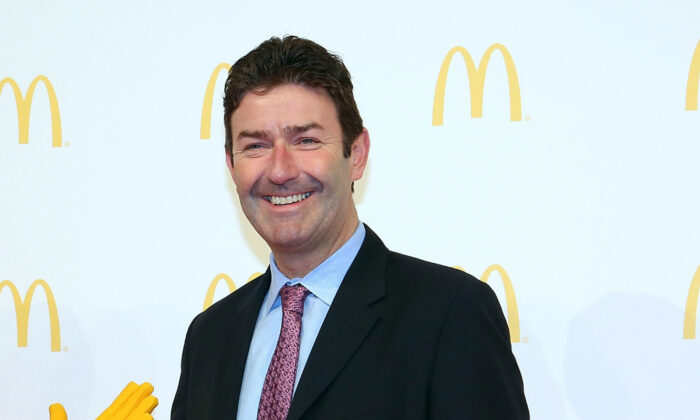 at Frankfurt International Airport on March 30, 2015, in Frankfurt am Main, Germany.
Companies

Former McDonald’s CEO Steve Easterbrook has returned $105 million severance payment after the company announced on Dec. 16 that it has settled its lawsuit against him.

The fast-food giant brought a suit against its disgraced former chief executive back in August 2020, claiming that he lied during the company’s internal probe into his inappropriate relationship with a subordinate before his firing in November 2019.

Easterbrook promptly apologized for his conduct in a statement following the settlement after a bitter court battle.

“During my tenure as CEO, I failed at times to uphold McDonald’s values and fulfill certain of my responsibilities as a leader of the company,” he said in a statement. “I apologize to my former co-workers, the Board, and the company’s franchisees and suppliers for doing so,” said Easterbrook.

As part of the deal announced on Dec. 16, McDonald’s agreed to drop its lawsuit against Mr. Easterbrook.

“This settlement holds Steve Easterbrook accountable for his clear misconduct, including the way in which he exploited his position as CEO,” said McDonald’s Chairman, Enrique Hernandez Jr., in a statement.

“The resolution avoids a protracted court process and allows us to move forward. It also affirms the Board’s initial judgment to pursue this case.”

Easterbrook was fired in 2019 after admitted that he engaged in a consensual relationship with an employee in violation of company policy.

The company board initially determined that Easterbrook had “demonstrated poor judgment,” but decided not to terminate his position with McDonald’s “for cause,” as no proof of dishonest behavior was known at that time.

Despite their findings, the board still granted him a severance package that included $40 million in compensation plus company stock. Since 2019, the stock has climbed 37 percent to more than $264 per share.

The board of McDonald’s hoped that the decision would quietly avoid a lengthy legal dispute with its former CEO.

However, Easterbrook’s agreement contained a provision that would let McDonald’s recoup severance payments if it later determined that he should have been fired for cause, leading to the lawsuit.

New evidence came to light in July 2020, when a second investigative probe was launched after allegations arose that Easterbrook lied to the company and destroyed information regarding his inappropriate behavior, including three alleged additional sexual relationships with employees.

The new probe had discovered “dozens of nude, partially nude, or sexually explicit photographs and videos of various women, including photographs of these company employees, that Easterbrook had sent as attachments to messages from his company email account to his personal email account.”

It was found that Easterbrook further abused his position as CEO by secretly handing hundreds of thousands of dollars’ worth of stock to one of the women he was having a sexual relationship with.

The board has been criticized for bungling the initial investigation, since the company servers were not checked, as was typical, as Easterbrook allegedly deleted the emails from his phone.

Some investors have voted against the re-election of certain longtime board members, including Hernandez in August 2021.

McDonald’s faces lawsuits from shareholders and from Teamsters Local 237 Additional Security Fund and two affiliates, alleging they breached their fiduciary duty over the scandal.

“While Steve’s misconduct need not be forgiven by any member of this community, he has apologized to his former co-workers, franchisees, suppliers and the board for the profound errors he made,” said Hernandez.

“Today’s resolution avoids a protracted court process and moves us beyond a chapter that belongs in our past.”