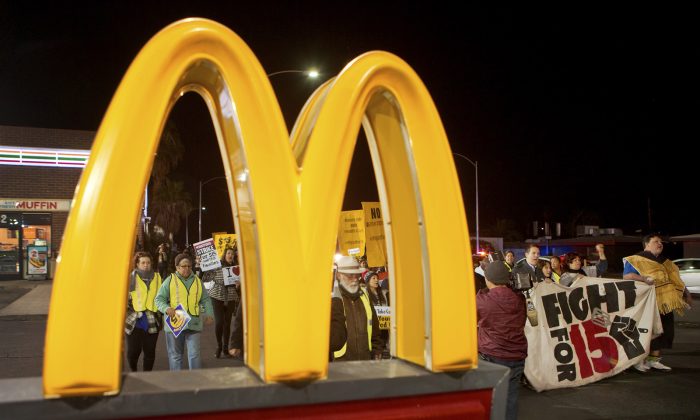 People march during a minimum wage protest, in Las Vegas on Nov. 29, 2016. Fast-food restaurant workers and home and child-care workers participated in protests nationwide for a $15 per hour minimum wage. (L.E. Baskow/Las Vegas Sun via AP)
US

As McDonald’s employees protest for a $15 per hour minimum wage, the fast food chain may have plans to replace them, said the restaurant chain’s former CEO.

A number of minimum wage protesters were arrested on Tuesday across the country, including in Chicago, Detroit, Houston, Los Angeles, Minneapolis, and New York, The Associated Press reported.

But the protests might spell doom for the protesters who work at McDonald’s: the chain earlier this month rolled out self-serving kiosks at select locations.

On Tuesday, former McDonald’s CEO Ed Rensi said that the wage protests have spurred on the kiosks.

“It brings me no joy to write these words,” Rensi wrote in Forbes. “The push for a $15 starter wage has negatively impacted the career prospects of employees who were just getting started in the workforce while extinguishing the businesses that employed them. I wish it were not so. But it’s important to document these consequences, lest policymakers elsewhere decide that the $15 movement is worth embracing.”

It’s not just McDonald’s that has embraced job-replacing technology. Numerous restaurant chains (both quick service and full service) have looked to computer tablets as a solution for rising labor costs that won’t adversely impact the customer’s experience. Eatsa, a fully-automated restaurant concept, now has five locations—all in cities or states that have embraced a $15 minimum wage.

Raising the minimum wage would harm employees’ prospects, Rensi said, adding it would “wipe out thousands of entry-level opportunities for people without many other options.”

More than 500 locations in Florida, New York, and California will have the new feature, it was reported. Later, Boston, Washington D.C., Chicago, Seattle, and San Francisco will also have the kiosks.

McDonald’s president Chris Kempczinski said rolling out the kiosks in the cities was “very purposeful” as they are “trendsetting” markets, Fortune magazine reported.