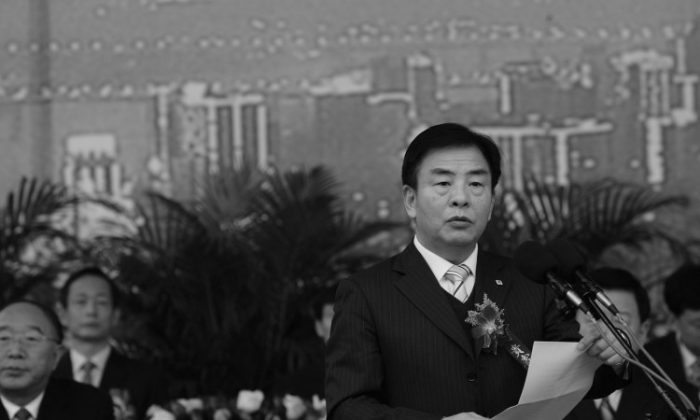 Former Mayor of Chongqing, Once Chased Away, Returns

Wang Hongju was born in Chongqing in 1945 and was an official there for many years. He became mayor of the city in 2003.

In 2009, when Bo’s “Anti-Mafia Campaign” in Chongqing was at its peak, Wang Hongju was targeted for being involved with mafia. Actually, it was aimed at Wang’s boss, He Guoqiang, a member of the Politburo.

According to Hong Kong political magazines, Wang Hongju is a Chongqing local and represents local bureaucrats. Facing Bo’s aggressive actions, Wang initially tried to protect his and his groups’ interests. Finally, he realized he couldn’t even protect himself.

During the time when Bo was in Chongqing, more than 2,000 Chongqing officials were taken down, including eight department-level officials. In addition, in all the local media reports about Chongqing’s Anti-Mafia Campaign, Bo Xilai and Wang Lijun, former vice-mayor and head of the Public Security Bureau (PSB) of Chongqing, got most of the coverage. Huang Qifan was mentioned occasionally, but Wang Hongju’s name was seldom heard.

When Wen Qiang, former chief of Chongqing’s Public Security Bureau, and Wu Xiaoqing, former director of the Enforcement Bureau of the Higher People’s Court in Chongqing, were arrested and tried, Wang Hongju suddenly realized he could be labeled as the behind-the-scenes boss of the mafia.

In November 2009, the Economic Observer reported a mafia case involving Chongqing businessman Wang Tianlun who wrote a letter to Wang Hongju to propose the establishment of Chongqing’s meat processing and distribution center. In order to monopolize Chongqing’s pork business, Wang Tianlun was asking for Wang Hongju’s support. The written approval from Wang Hongju could be used as evidence of his involvement with “the mafia.” The newspaper published a photo of the original approval on its website—a rare action.

At that time, Wang Tianlun was already the target of Bo Xilai’s anti-mafia action, and he was given the death sentence in February 2012 for organizing and leading a criminal organization and bribing officials.

On Dec. 3, 2010, Wang Hongju resigned. He was 64 year old, one year younger than a typical retirement age for officials.

Based on Bo’s personality and his adherence to the Maoist dictum of “chasing after and annihilating all enemies,” Bo wouldn’t let his political foes survive so easily. Moreover, if he could take down someone who has a minister’s rank, such as Wang Hongju, it could cause a sensation in Chongqing and nationwide.

However, an insider of Chongqing’s political circle revealed that Wang Hongju had strong protection from politburo member He Guoqiang and Communist Party chief of Guangdong Province Wang Yang. Wang Hongju left Chongqing unharmed and became the deputy chair of the NPC Environmental and Resources Protection Committee, staying in Beijing and avoiding trouble.