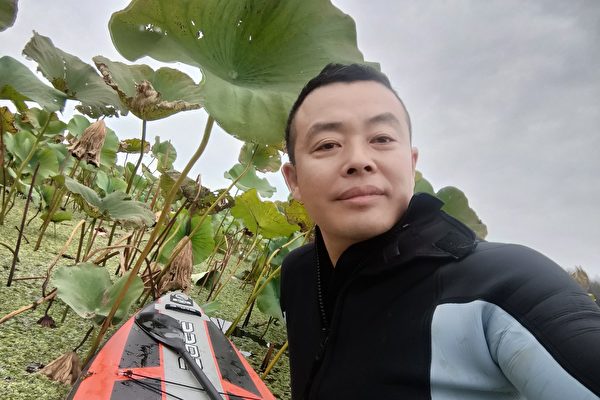 Zhao Lanjian, who published a video exposing the official’s false claims regarding the identity of Xuzhou’s chained woman on Feb. 23, 2022, is now in exile in the United States. (Provided by Zhao Lanjian)
China Human Rights

After several instances of being interrogated while locked onto an iron chair used for death row prisoners, a veteran Chinese journalist and photographer decided to leave China.

On August 4, Zhao Lanjian described to the Chinese language edition of The Epoch Times his experiences in dealing with Chinese national security. He said, “The environment is bad. I’m a human being, I vote with my feet.”

He became the target of local police and national security agents after posting online his investigation of the chained woman of Xuzhou, which exposed the lies of the authorities about the case.

Zhao described how he felt when he was sitting on the iron chair, which he said is very heavy, “That iron chair is really scary.”

In July, he finally arrived in the United States after fleeing China through Malaysia.

He recalled the exhausting and lengthy interrogations by the police. He said, “Each time it would take at least five hours.” One time he was summoned and the interrogation lasted from 9 a.m. to 5 p.m.

He explained that the authorities did not follow any formal procedure or protocol, and he was not allowed to call a lawyer or record the questioning with his cell phone. Afterwards, he tried to file complaints, but to no avail.

For example, on May 10 he was illegally detained and interrogated by the state police from Hebei Province. Without due process, the police accessed his personal information on his mobile phone, including his bank account passwords.

Each interrogation was tense and frightening, he said, “They went through every question over and over again,” from his ex-girl friend, to his marriage, family, and relatives.

“But in general, they didn’t beat me,” he said, “because I know some international people, like the president, the commissioner of the United Nations human rights organization.”

Journalist Turned into an Investigator of Social Injustice

In 2014, he quit his job as a journalist and started his own field investigations on social injustice cases both at home and abroad, as China tightened its controls on the press. For instance, he reported on the issue of waste water pollution in Inner Mongolia’s Tengger desert.

After the news of the chained woman broke out in January, the local authorities issued a notice on Feb. 7 which identified the chained woman’s name as Xiao Huamei, a native of Yunnan Province and possible victim of traffickers.

On Feb. 10, Zhao decided to go to Yunnan out of his concern about missing children inside China.

The chained woman’s story came to light in January, right before the Beijing Olympics were to begin. The incident exposed how local police colluded with human traffickers in rural China, as The Epoch Times has previously reported.

The woman was found in a village shed where she was chained by her neck. She was believed to be a victim of human trafficking, and had been raped for many years. She delivered eight children for the men who bought her.

The video of the chained woman ignited public anger.

During his visit to Yunnan Zhao located Xiao Huamei’s uncle.

Suppressed by Police From Five Provinces and Cities

Prior to Zhao’s visit, two female volunteers, doubting the official’s claim of the woman’s identity, had also visited the uncle. Both of them faced the regime’s censorship and were held in detention.

Zhao’s finding in Yunnan prompted him to release the recorded interview online.

More than a month later, on March 30, he further reported his findings to the Ministry of Public Security, the Supreme People’s Procuratorate, and local authorities.

He also accepted media interviews from outside China.

However, his actions made him a target of police from five provinces and cities, including Yunnan, Xuzhou, his hometown Beijing, and his house registration in Jilin and his temporary residence in Hebei were screened.

Some of them called him and told him to keep silent, while others summoned him for interrogation.

On April 15, he was brought to the local police station for investigation by a team of police from the provinces of Hebei and Jiangsu.

In early May, Hebei local authorities called him multiple times demanding that he leave the area because he hadn’t been vaccinated against COVID-19. The distressed Zhao decided to flee China.

Zhao said that around March 17, a time when he felt very depressed, he was interviewed by The Epoch Times and NTD TV. The interviews offered him “great comfort, … I decided to quit the Young Pioneers and the Communist Youth League of the Chinese Communist Party,” he said.

Haizhong Ning and Gu Xiaohua contributed to this report.