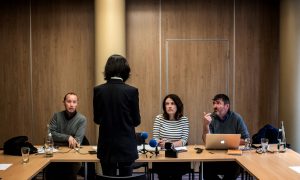 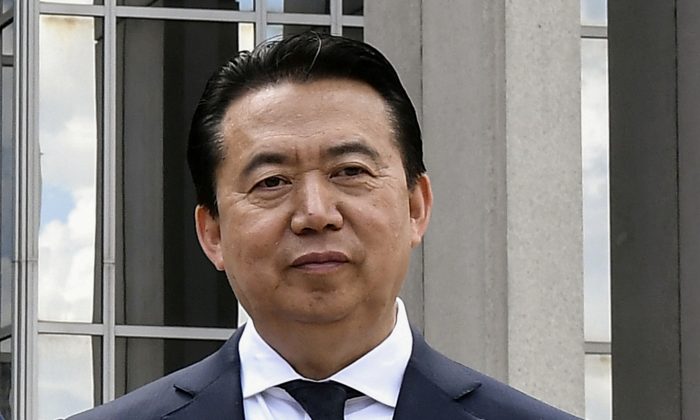 Meng Hongwei poses during a visit to the headquarters of International Police Organisation in Lyon, France, on May 8, 2018. (Jeff Pachoud/Pool via Reuters)
Chinese Regime

Interpol, the global police coordination agency based in France, stated in October 2018 that Meng had resigned as its president, days after his wife reported him missing after he traveled back to his home country of China.

In March, the ruling Communist Party said its investigation into Meng found he spent “lavish” amounts of state funds, abused his power, and refused to follow party decisions.

“Meng Hongwei made final remarks, and admitted guilt and expressed remorse to the court,” the official People’s Daily said of the hearing.

The paper added that his alleged crimes in various posts, including when he was deputy minister of public security and head of China’s coast guard, went back to 2005.

The court, in the northern city of Tianjin, will announce its verdict at a later date, it said.

It isn’t clear who Meng’s lawyer is, and it was not possible to reach him or a legal representative for comment. Chinese courts are tightly controlled by the Communist Party, and Meng is almost certain to be found guilty.

His wife, who has been granted asylum in France, has said the charges against him are politically motivated.

His appointment prompted concern at the time from rights groups that China might try to leverage his position to pursue dissidents abroad, pointing to the lack of transparency in China’s legal systems.

Chinese leader Xi Jinping has presided over a sweeping corruption crackdown since coming to power in 2012, vowing to target both “tigers” and “flies,” a reference to elite officials and ordinary bureaucrats.

The campaign has led to the jailing or punishment of thousands of officials and brought down dozens of senior party and military officials.

Beyond graft issues, the anti-corruption effort has taken aim at those who express doubt in public about party policies or are found lacking in political loyalty.

China has rebuffed criticism that the campaign is as much about settling political scores as about stamping out criminal acts.

Meng’s political connections may be what cost him his post. He may have somehow been influenced by former security chief and ex-Politburo Standing Committee member Zhou Yongkang, who is now serving a life sentence for corruption.

Meng’s various jobs likely put him in close contact with Zhou and other Chinese leaders in the security establishment, a sector long synonymous with corruption, opacity, and human-rights abuses.

Xi has ousted many powerful officials—most of them part of an enemy faction loyal to former leader Jiang Zemin.

By Michael Martina and Ben Blanchard. The Epoch Times contributed to this report.