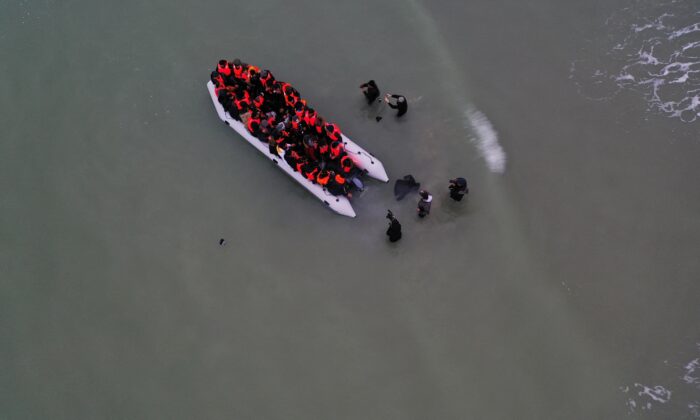 A drone photo showing a group of illegal immigrants react as they succeeded to get on an inflatable dinghy, to leave the coast of northern France and to cross the English Channel, in Wimereux near Calais, France, on Dec. 16, 2021. (Pascal Rossignol/Reuters)
UK

A former immigration minister has said a law on modern slavery introduced by David Cameron’s government in 2015 has been used thousands of times by illegal immigrants to escape deportation.

Chris Philp, who was immigration minister between September 2019 and September 2021, said the Modern Slavery Act had “inadvertently turned into one of the biggest loopholes in our immigration system, allowing illegal immigrants and foreign criminals to remain in the UK.”

The legislation was the brainchild of the then-Home Secretary Theresa May—who later became prime minister—who thought it would protect vulnerable people from exploitation by unscrupulous gangmasters and pimps, as well as people like Saeeda Khan, who was convicted in 2011 of exploiting a Tanzanian woman who she brought to London and made work around-the-clock as a servant for £10 a month.

But Philp, writing for The Telegraph, said the law had been exploited by unscrupulous immigration lawyers who knew it relied on “absurdly low levels” of proof.

Philp said he had witnessed illegal immigrants who had crossed the English Channel from France and initially deny they have been trafficked into slavery, only to change their story after receiving legal advice.

He said: “Immigration lawyers know they don’t need to provide any real proof—just offer a vaguely plausible-sounding story that is roughly consistent with known modern slavery patterns and it will get accepted. In some cases they even submitted copy and paste claims for different clients without even bothering to change the details.”

‘Making a Mockery of Our Goodwill’

“It is making a mockery of our goodwill. I saw case after case where serious foreign criminals—including sadistic rapists and brutal murderers—used last-minute modern slavery claims to prevent deportation back to their home country,” added Philp, who resigned as a digital economy minister hours before Boris Johnson finally quit as prime minister.

Earlier this month a former director general of the UK Border Force, Tony Smith, told The Telegraph many Albanian illegal immigrants were being advised by people traffickers to exploit the Modern Slavery Act at the first opportunity.

The Telegraph claimed Home Secretary Priti Patel was planning to review the Modern Slavery Act, if she is kept on by the new prime minister.

The two candidates vying for the leadership of the Conservative Party responded to Philp’s comments by promising to tighten up the law.

Former Chancellor Rishi Sunak’s spokesman told The Telegraph, “Rishi has pledged to begin fundamental reform of the law around asylum in his first 100 days and will close any loophole preventing illegal immigrants and foreign national offenders from being deported.”

A spokesman for Foreign Secretary Liz Truss told The Telegraph: “It is right that Priti [Patel] has started to overhaul our abused modern slavery laws. Liz would build on this work, closing loopholes that are abused by smugglers as we strengthen our nation’s borders.”

The Epoch Times has reached out to the Home Office for comment.