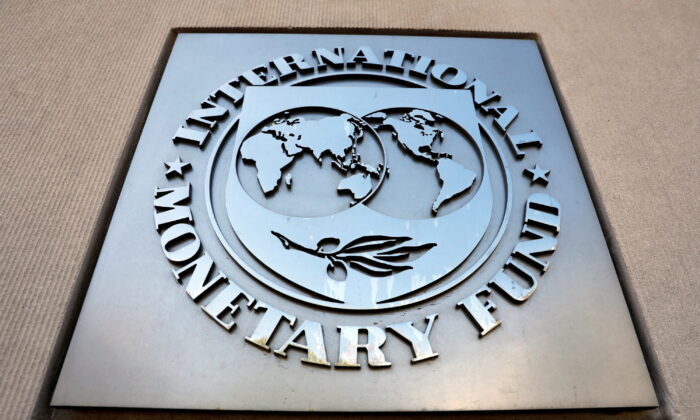 The International Monetary Fund logo outside the headquarters building during the IMF/World Bank spring meeting in Washington, on April 20, 2018. (Yuri Gripas/Reuters)
Economy

Former IMF Chief Economist Says US Is in ‘Productivity Recession,’ Inflation Is ‘Terrible’

Former IMF chief economist Kenneth Rogoff has said that the United States is in a “productivity recession” and that inflation is “terrible,” while taking aim at the Federal Reserve’s strategy to bring down the soaring cost of living.

Rogoff, who is a professor of economics and public policy at Harvard University, spoke to Fox New’s “Mornings with Maria” on Sept. 15, where he added that U.S wages are significantly worse than they appear.

“We’re in a productivity recession. Productivity is just awful,” Rogoff said, citing points such as the country’s emergence from the COVID-19 pandemic and an increase in people working from home where they are “producing less,” which in turn makes “effective wages higher than they seem,” as reasons for such a recession.

“I’m not criticizing these things, but they make growth less,” he said, adding that policies surrounding fossil fuels were also hampering growth.

U.S. gross domestic product (GDP) decreased by 1.6 percent in the first quarter and another 0.9 percent in the second quarter. Despite this, many experts continue to state that the U.S. economy is not yet in a recession.

Rogoff’s interview comes as experts are bracing for what is widely expected to be another aggressive interest rate hike from the Federal Reserve next week.

Fed officials are set to meet next on Sept. 20–21, with further increases expected into early next year.

‘Fed Going to Have Tough Question to Face’

When asked what kind of a hike he anticipates the central bank will roll out next week, Rogoff said: “I think they [Fed] are going to hike 75 [basis points], but going to talk about hiking 1 [percent], that is not what they’re going to do. I think the Fed is going to keep hiking up to 4.5, maybe up to 5 percent at some point in 2023, and I think that is not necessarily going to be enough to cool inflation below 3.5 percent or 4 percent.

Rogoff added that “wage numbers are worse than they seem” and inflation is “terrible,” with the costs of firms going up faster than wages due to “changing working conditions.”

On Sept. 15, President Joe Biden announced that a tentative deal had been reached between major U.S. railroads and unions representing more than 100,00 workers after the latter planned to go on strike over issues such as companies’ workplace attendance policies.

Experts had warned such a strike could cause significant disruption to U.S. supply chains and impact the broader economy.

When asked about the issue, Rogoff said he believes there may be a “world of more strikes” because the Biden administration is “sympathetic to unions.”

“They did cut a deal, but that’s going to get passed into prices, into everything, so that’s what happens when wages go up,” Rogoff said. “I think we’re going to have a lot of pressure in the labor market, and I think the market has not fully absorbed how much interest rates are going to go up this year again. I don’t know where this is going to end. “