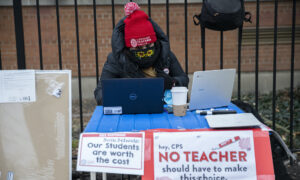 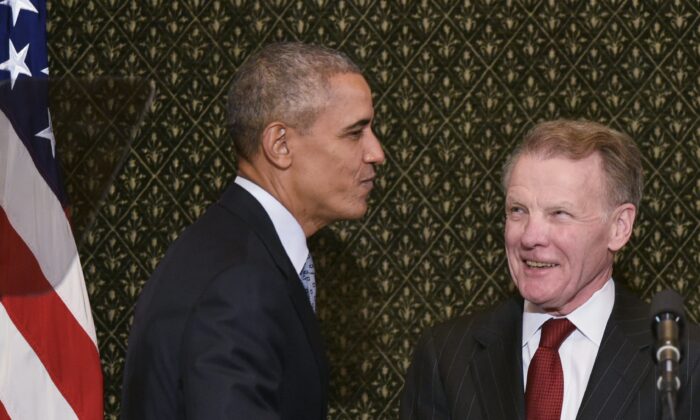 Then U.S. President Barack Obama shakes hands with then Illinois House Speaker Michael Madigan as he arrives to address the Illinois General Assembly at the Illinois State Capitol in Springfield, Ill. on Feb. 10, 2016. (Mandel Ngan/AFP via Getty Images)
Politics

Chicago Democratic state Rep. Michael Madigan announced on Feb. 18 that he would resign his seat in the Illinois legislature amid an ongoing investigation into alleged corruption and federal bribery.

“It has been my great honor to serve the people of Illinois as speaker of the House and state representative of the 22nd District,” he said in a statement on Thursday, adding that he’s “at peace” with his decision to resign.

Madigan, a protégé of former Chicago Mayor Richard J. Daley, had been the longest-serving state house speaker in U.S. history with 50-years of service.

However, the 78-year-old Democratic lawmaker lost his bid to remain speaker of the House last month when Democrats in the House backed Rep. Emanuel “Chris” Welch.

“Fifty years ago, I decided to dedicate my life to public service,” Madigan said in his statement on Thursday.

“Simply put, I knew I wanted to make a difference in people’s lives. I believed then and still do today that it is our duty as public servants to improve the lives of the most vulnerable and help hardworking people build a good life.”

Madigan did not explicitly state the reason for his departure but acknowledged the federal inquiry he faces.

“It’s no secret that I have been the target of vicious attacks by people who sought to diminish my many achievements lifting up the working people of Illinois,” Madigan said.

“The fact is, my motivation for holding elected office has never wavered. I have been resolute in my dedication to public service and integrity, always acting in the interest of the people of Illinois.”

Madigan was first elected to the House in 1970 and served as its speaker for all but two years since 1983, when Republicans gained control of the chamber.

However, his career has been marred after finding himself implicated in a long-running bribery scheme in July involving the state’s largest electric utility, Commonwealth Edison (ComEd).

Federal authorities have accused leaders at ComEd of bribing associates of Madigan in exchange for his organization’s help in passing favorable legislation.

Court filings didn’t name Madigan but made it clear he was the person in documents referred to as “Public Official A.”

ComEd admitted it secured jobs, often requiring little or no work, and contracts for his associates from 2011 to 2019 for favorable treatment in regulations. ComEd agreed in August to pay $200 million to defer the prosecution for a bribery charge ComEd admitted to, though that settlement did not preclude criminal charges against any individual.

Madigan has not been charged with a crime and has denied any wrongdoing but a number of former top ComEd executives and associates of Madigan have been indicted, including his foremost political confidant, former lawmaker, and lobbyist Michael McClain of Quincy.

Despite his resignation from the House, Madigan remains the state’s Democratic Party chairman and head of the 13th Ward Democratic organization.