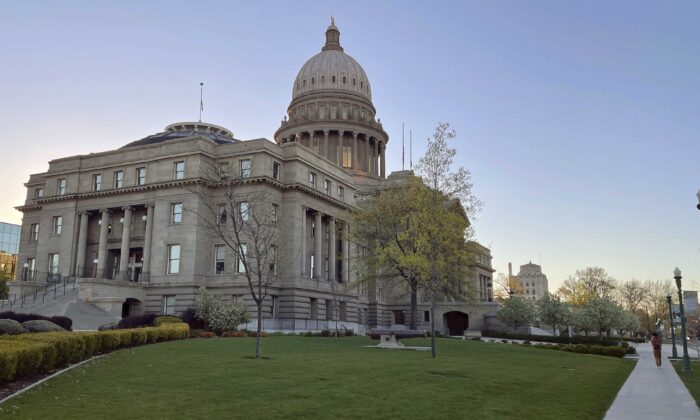 The Idaho Statehouse is seen at sunrise in Boise, Idaho, on April 20, 2021. (AP Photo/Keith Ridler)
Crime and Incidents

A former Idaho lawmaker who was convicted in April of raping a legislative intern when she was 19 was sentenced to 20 years in prison on Wednesday.

Aaron von Ehlinger was sentenced by Ada County District Judge Micheal Reardon, who stated that at least eight of those 20 years need to be served in prison before he is eligible for parole. The other 12 years could be spent in prison, on parole, or both.

The former state representative was found guilty by a jury in April but has maintained his innocence.

His conviction came roughly a year after he resigned from his seat in the Idaho House after an ethics committee recommended that he be banned from the statehouse because he committed “conduct unbecoming a representative.”

An unnamed woman, who was a 19-year-old intern at the time of the assault, said that von Ehlinger forced her to perform oral sex on him at his apartment in Boise, Idaho, after they had dinner together. An investigation was launched into the allegations in March 2021 after the intern told a statehouse supervisor of the incident.

Von Ehlinger has maintained that the sex was consensual.

Reardon told von Ehlinger on Wednesday that he had failed to show empathy or remorse, and that it was clear he was not ready for sex offender treatment.

The judge said the 20-year sentence would deter the former lawmaker from committing another crime while he’s behind bars.

Other alleged incidents of von Ehlinger’s behavior were also revealed, including a lobbyist who claimed that he followed her into a bathroom, and a married clerk who said von Ehlinger asked her on a date, which made her uncomfortable, the Idaho Statesman reported.

The former legislative intern, who remained anonymous during the legal proceedings, told the court on Wednesday that the incident had a devastating impact on her life, stating that her autonomy was “ripped violently away.” She added that just hearing von Ehlinger’s name can trigger panic attacks and she has been forced to install security systems and cameras outside her home after supporters of the former lawmaker publicly shared her name, photo, and personal details about her.

She further claimed his supporters have repeatedly harassed her but told the court that she will “not be intimidated into silence so that another rapist can slip through the cracks of this justice system.”

“I hope he rots in pieces behind those cold metal bars,” she added.

Judge Not Swayed by von Ehlinger

Von Ehlinger pointed to 26 letters of support that were sent to the court and which contained personal opinions about him stating that he is “a good guy,” including letters from his ex-wife and state House Republican lawmaker Vito Barbieri, KTVB reported.

Von Ehlinger also reminded the judge that he served as a paratrooper in the Afghanistan War, stating that he was trained to protect people, especially women.

Prior to the trial, von Ehlinger had gone on a pilgrimage to Israel, Jordan, and Egypt where he was “ultimately baptized in the Jordan River,” he told the judge.

“I confessed a lot of sins your honor—I am not a perfect man—but rape was not a sin that I could confess to. It would be a sin to confess to something that I did not commit,” von Ehlinger said, according to KTVB.

Von Ehlinger’s attorney Jon Cox, while asking for a three-year rehabilitation program, also said the prosecution had depicted his client to be “a monster.”

However, the judge disagreed and also ordered von Ehlinger to register as a sex offender and placed him under a no-contact order lasting through 2055.

The Epoch Times has contacted von Ehlinger’s attorney for comment.