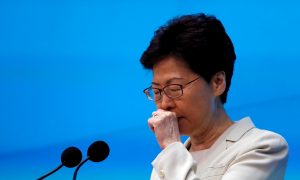 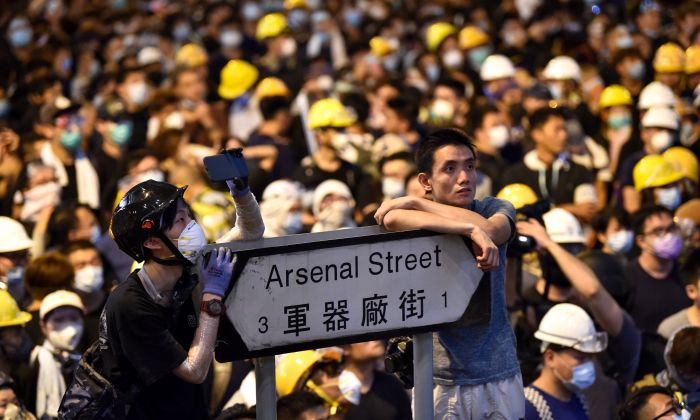 Thousands of protesters converged on Hong Kong's police headquarters on June 21, demanding the resignation of the city's pro-Beijing leader and the release of demonstrators arrested from a June 12 protest. (Hector Retamal/AFP/Getty Images)
China Society

Thirty-two ex-officials and retired lawmakers in Hong Kong have signed an open letter on June 23 calling for the city’s leader Carrie Lam to immediately announce the withdrawal of a controversial extradition bill that drew millions of protesters to the streets in recent weeks.

The letter, initially signed by 27 former government officials on June 14, has gained six more cosigners and was issued again on June 23, with three main demands.

The bill, if passed, would allow mainland China to seek extradition of any individual from Hong Kong, which Hongkongers worry would allow Beijing to punish its critics with impunity.

Following an international outcry over how city police used aggressive tactics to disperse protesters last week, Lam announced on June 15 that the bill would be suspended indefinitely.

Lam added that the bill would most likely lose effectiveness after the current legislative term ends in July 2020.

But Hongkongers were dissatisfied with the suspension. A day after Lam’s announcement, roughly two million attended a march calling for the bill to be completely withdrawn.

The cosigners made the same plea. They said in the latest version of the letter that the current limbo would only lead to more social unrest, hence the need for immediate withdrawal.

“This period of time [while the bill remains suspended] is, in fact, prolonging the instabilities the bill has caused,” the letter stated. “A firm refusal to scrap the bill will only fuel suspicions and worries in society, hindering things from returning to normality.”

Former constitutional affairs secretary Michael Sze, a cosigner of the letter, suggested that the intense backlash against the bill did not stem from the government’s lack of explanation for the bill, as what Lam described, but from the bill’s flawed nature.

“The proposed amendments to the bill will strike down the wall between Hong Kong and mainland China, which will deprive the Special Administrative Region [Hong Kong] of all its guaranteed securities,” Sze said in a separate statement quoted by Hong Kong newspaper Mingpao. “And this is why many Hongkongers have refused to buy the [government’s] explanations.”

The letter also demanded that Lam order an independent inquiry into allegations of police brutality when officers tried to disperse protesters gathered outside the legislature on June 12, and to formally retract the categorization of the June 12 demonstrations as a “riot.”

Amnesty International issued a recent report in which it analyzed video footage from the June 12 protests and concluded that the officers applied “unlawful” use of force that led to more than 80 civilian injuries.

Hong Kong Police Commissioner Stephen Lo recently sought to water down his earlier characterizations of the protests as riots, explaining at a June 17 press conference that the protests as a whole were not a riot; only five protesters are suspect of rioting.

The cosigners pointed out that according to Hong Kong laws, the definition of the rioting offense is to participate in demonstrations that are deemed as riots. “If there was no riot, then no one should have committed riot offenses; otherwise, if the June 12 demonstrations were deemed as a riot, then all participants would face offenses of rioting,” the letter said.

They thus called upon Lam and Lo to immediately retract their statements that described the demonstrations on June 12 as a riot.

“Hong Kong people are demonstrating in peaceful manners,” the letter said. “Their quality has been highly praised internationally, which forms a sharp contrast with the government’s reference to their own citizens as ‘rioters.’”